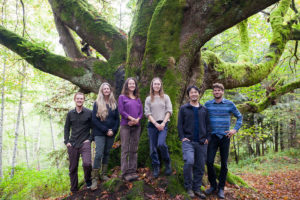 We’ve spent years exploring ancient forests across BC – however, they never fail to impress us with their unparalleled beauty and grandeur! We hope you feel the same way.

This year, the Ancient Forest Alliance has not only survived its critical first five years when many new organizations often fold, but has flourished due to the ever-growing support of thousands of supporters who have contributed financially and volunteered to help us reach our goals.

And our goals are lofty – we aim to achieve comprehensive legislation based on science to protect all of the endangered old- growth forests in British Columbia.

Unfortunately, the current BC government still clings to the notion that major industrial logging of endangered ancient forests is still an ethical and viable undertaking – which it is not. The history of high-grade logging of the biggest and best old-growth stands in the valley bottoms and lower slopes in BC has resulted not only in the increasing collapse of old-growth ecosystems – as indicated through the decline of spotted owl, mountain caribou, marbled murrelet, and wild salmon populations – but also in the forest industry’s diminishing returns as the remaining trees become smaller, increasingly marginal, and more expensive to reach on high, steep mountainsides, resulting in the collapse of rural forestry employment.

We’ve certainly got our work cut out for us.  However, the Ancient Forest Alliance has been working hard not only as the lead organization, but as the ONLY organization focused exclusively on achieving comprehensive legislation to protect BC’s old-growth forests and ensuring a sustainable, value-added second-growth forest industry.

As a young and nimble organization, we’ve employed a significant amount of creativity and innovation in our approach. We are working with non-traditional allies including green businesses, forestry workers, unions, First Nations, and faith groups; extensively using professional photography and videography to share spectacular images of our endangered forests globally through the news and social media; creatively nick-naming places like the “Avatar Grove” and “Big Lonely Doug” which have gone viral and helped to raise widespread awareness; using a remotely-piloted aerial drone to monitor and document with incredible HD video our most magnificent ancient forests; and undertaking highly effective, door-to-door voter education campaigns in targeted ridings to hold elected politicians accountable – which we can do as we’ve opted-out of having charitable status, which restricts most environmental groups from engaging in more direct but effective political advocacy work that influences government policies.

We look forward to more progress and success, thanks to our supporters who are the foundation for an organization like no other, working tirelessly to save the last stands of the most beautiful ecosystems on planet Earth.

This year we made significant progress with our BC Natural Lands Acquisition Fund Campaign (formerly BC Park Fund campaign), with growing support from a diversity of associations. Through this campaign, we are calling on the BC government to establish a fund of at least a $40 million/year to purchase and protect endangered ecosystems, including old-growth forests, on private lands, such as lands owned by logging company Island Timberlands on central Vancouver Island (McLaughlin Ridge, Mount Horne near Cathedral Grove, Cameron Valley Firebreak, etc.) and on the Sunshine Coast.

Early in the year, thanks in large part to our work highlighting this issue, engaging stakeholders and supporting the advocacy work of the Watershed-Forest Alliance in Port Alberni, the BC Teachers Federation passed a motion for Island Timberlands to divest itself of McLaughlin Ridge, one of the key old-growth forests near Port Alberni that we are aiming to protect through this campaign, and to upgrade their forestry practices to Forest Stewardship Council (FSC) standards.  This was followed by a resolution by the Port Alberni city council, and Island Timberlands expressing potential interest in selling McLaughlin Ridge.

In December, after collaborating with the UVic Environmental Law Centre (ELC), ELC published a ground-breaking report, prepared for the AFA and entitled “Finding the Money to Buy and Protect Natural Lands,” which provides a variety of funding mechanisms for the purchase and protection of endangered ecosystems on private lands.

As a result of our work throughout the year with various organizations around efforts to protect privately owned endangered ancient forests owned by Island Timberlands, media coverage in major media publications, and trips to Horne Mountain (near Cathedral Grove) and the Cameron Valley Firebreak to meet with local activist groups such as the Watershed-Forest Alliance and document endangered old-growth and logging activity on private lands, we had 16 major BC conservation and recreational groups signed on to support this call by the end of the year.

Building Momentum for the Walbran Valley

In January 2015, AFA campaigner TJ Watt undertook a trip to the Walbran Valley, following up on flagging tape found there late the previous year in the Central Walbran Ancient Forest. Later in the year, after it was found that logging company Teal-Jones, whose Tree Farm License encompasses the Central Walbran, had proposed 8 cutblocks in the area, we undertook a series of expeditions to scout and document the proposed cutblocks, during which we captured a recording of a marbled murrelet (a threatened, old-growth dependent bird) in the Central Walbran, as well as unique aerial footage of the old-growth and logging operations through the use of a drone.  We also engaged in public awareness-raising and advocacy around the issue through extensive news media coverage, action alerts and a public information and community forum about the Walbran Valley.

By the end of the year, thanks in large part to our work highlighting the importance of old-growth eco-tourism for a sustainable economy, the Port Renfrew Chamber of Commerce (representing 73 businesses in the region) had issued a statement calling on the BC government to protect ancient forests the ancient forests of the Walbran Valley.

A Focus on Other Key Areas

In May, the AFA helped to highlight efforts among residents of Powell River on the Sunshine Coast to protect a tract of forest in the city limits, Lot 450, from logging by Island Timberlands.  In July, the AFA’s Ken Wu spoke at a forum in Powell River, ‘Saving the Greenheart of Powell River – Alternatives to clearcutting in Lot 450.’

In July, we highlighted the threat of two new proposed cutblocks and a proposed road on Edinburgh Mountain in the Gordon River Valley on Vancouver Island.  This area is the site of some of the largest tracts of intact unprotected old-growth left on southern Vancouver Island, including the Upper and Lower Edinburgh Groves near the Big Lonely Doug and Avatar Grove.

In September, we helped to amplify the message of the Elphinstone Logging Focus (ELF) opposing the logging of Dakota Creek area of Mt Elphinstone near Roberts Creek, important black bear habitat.

Throughout the year, the AFA undertook numerous expeditions to document remote endangered ancient forests by both land and air.  We visited and documented areas such as the Walbran Valley, Cameron Valley Firebreak and around Port Alberni, Mossy Maple Grove, and documented areas such as central Vancouver, the Klanawa Valley, Nootka Island, Brooks Peninsula, and the East Creek Rainforest through two aerial flights (thanks to Nick Temos for the donated flight time!) across Vancouver Island.

The AFA values our collaboration with forestry unions and workers, as we work to highlight the need for a sustainable forest industry that provides long-term jobs to forest-dependent communities.  In February, the AFA’s executive director Ken Wu gave a talk for the Pulp, Paper & Woodworkers of Canada Union.  In April, we had the PPWC president Arnie Bercov speak at our Five Year Anniversary event.  At the end of October, the AFA co-organized a Sustainable Forestry March and Rally in Duncan.

Early this year, we highlighted the findings from an earlier biodiversity blitz (regional species inventory) and consequences of potential logging at Echo Lake, one of the last lowland old-growth forests remaining in the Lower Mainland and perhaps the largest fall night-roosting site for bald eagles on Earth!   We brought media out to the region in March to cover the story, including biodiversity findings and the potential consequences of logging in this old-growth forest.

In August, we hosted a second biodiversity blitz at Echo Lake to further document species findings.

The AFA has participated in a wide variety of community events throughout 2015, including Earth Day events (Creatively United in Victoria and the Earth Day Celebration and Parade in Vancouver), Wild about Vancouver, the Vancouver Folk Music Festival, and the Salish Sea Spiritual Ecology Convergence in Vancouver.  In June, we hosted a public hike series, including a francophone walk in Francis King Regional Park, a Stanley Park Rainforest & Carbon Walk with Jens Wieting/Sierra Club of BC, a Walk with Andy MacKinnon at Goldstream Provincial Park, a Carbon & Climate Walk with Jens Wieting/SCBC at Goldstream Provincial Park, and a walk with Andy MacKinnon at Avatar Grove.

During a weekend boardwalk-building workparty in September, boardwalk coordinator TJ Watt and a group of dedicated volunteers built two new platforms and sets of stairs leading down the hill in the Upper Grove’s steep slope leading down to the creek, and also installed a beautiful bench near the Gnarly tree.

In October, during another construction workparty, the group made significant progress in the Lower Grove, constructing close to 80ft (25m) of new boardwalk and bridges over the area prone to flooding (just in time before heavy winter rains!) – also added traction to many meters of boardwalk, restored parts of the trails that were showing signs of wear, and helped make the route more clear to follow.

In April, we celebrated the AFA’s 5 Year Anniversary at the White Eagle Polish Hall with a “Farm and Forage” sustainable 3 course dinner created by renowned Victoria chef Landon Crawford and team, featuring presentations by campaigners and special guests Andy MacKinnon, Vicki Husband and Arnie Bercov, music by Shauna Janz, door prizes and a great chance for supporters to connect!

Thank you to all who attended; all donors of food, drink, door prizes or other products/services; chefs, front house coordinator and food servers; speakers; musicians & artists; and volunteers.  You all played a big role in making this an incredibly special and memorable event!
In December, we hosted a special year end event featuring a slideshow by AFA campaigners and a great presentation by special guest Gisele Martin, Tla-o-qui-aht cultural educator and tourism operator.  We also hosted an Open House for supporters to come by our office and learn more about what we’re up to!

We look forward to continuing and broadening the scope of our work in 2016 and beyond to achieve comprehensive, science-based protection for endangered old-growth forests across BC and to ensure a sustainable, value-added second-growth forest industry in the province.  Thanks to all our supporters for all that you do to help make our vision a reality!