Tens of thousands of hectares of ancient forests are logged each year in BC, resulting in a huge climate and environmental footprint. In the past 150 years on BC’s southern coast – Vancouver Island and the southwest mainland – 75% of the original, productive old-growth forests have already been logged, including over 90% of the valley bottoms where the largest trees grow. 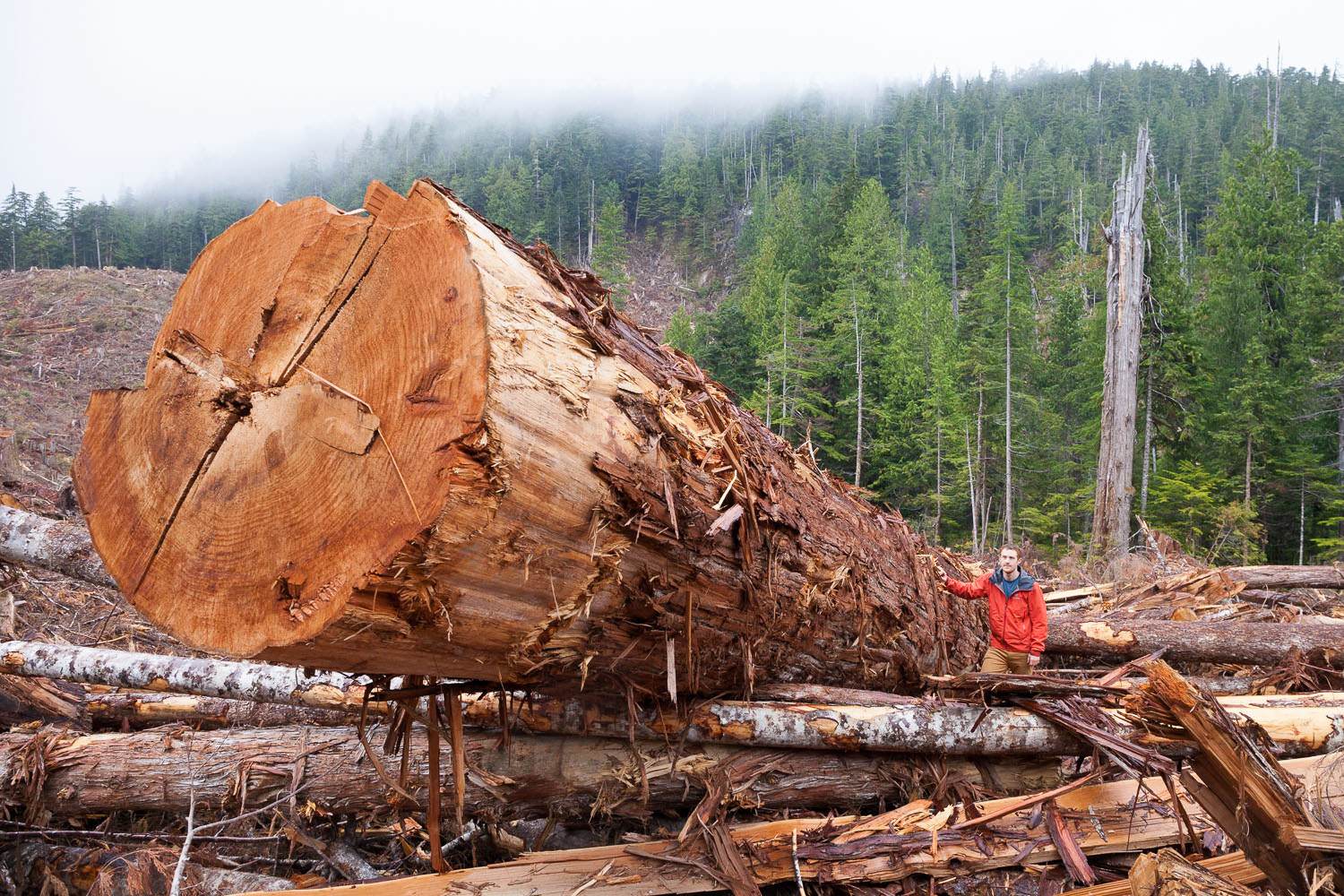 Old-growth logging on Edinburgh Mt. near Port Renfrew in 2016

Myth #2: "Ancient forests in BC are not endangered."

In order to placate public fears about the loss of endangered old-growth forests, the BC government’s PR-spin typically over-inflates the amount of remaining old-growth forests by including hundreds of thousands of hectares of marginal, low productivity forests growing in bogs and at high elevations with smaller, stunted trees, and lumps them in with the productive old-growth forests. These are where the large trees grow and where most logging takes place. It’s like including your Monopoly money in with your real money, and then claiming to be a millionaire, so why curtail spending? 3.3 million hectares of productive old-growth forests once stood on the southern coast. Today, only 860,000 hectares remain and only 260,000 hectares are protected in parks and Old-Growth Management Areas. 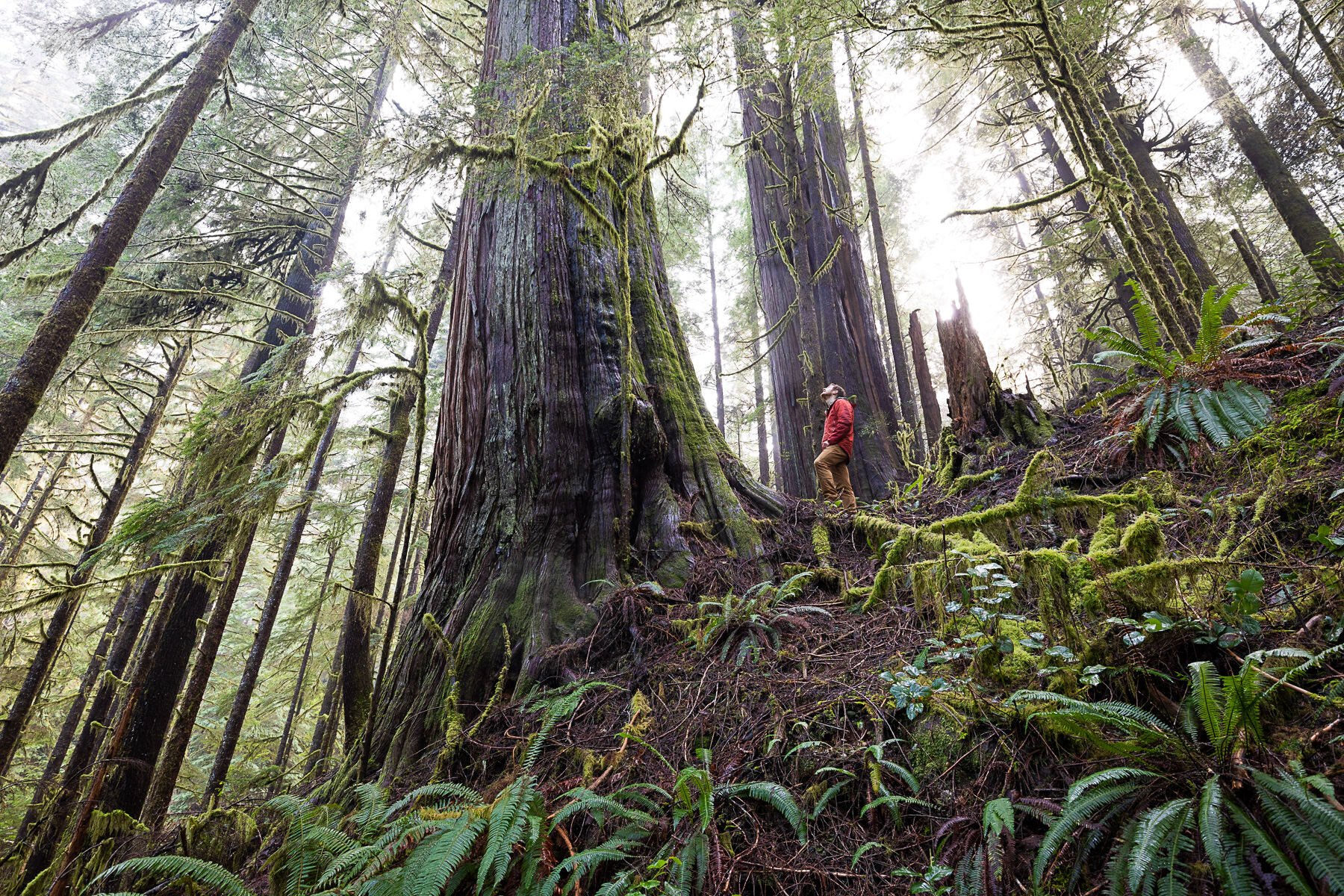 Myth #3: "Old-growth logging isn’t a problem as long as the trees are replanted."

Replanting does not adequately replicate an old-growth forest ecosystem. Second-growth or replanted forests lack many of the important features of old-growth forests. The trees are all the same age, so there are few gaps in the canopy to let light through and allow a rich understory to grow. In old-growth forests, the multi-layered canopy of differently-aged trees allow sunlight through, creating a rich, luxuriant understory that provides food and habitat for many species. It would take a long time—at least 200 years—for replanted stands to regain important old-growth characteristics. However, since the rotations are about 55 years on Crown lands on BC’s coast and as low as 30 years on private lands, these second-growth stands will never regain these characteristics. Many species, such as the marbled murrelet and northern spotted owl can only survive in old-growth forests, and these species are being driven to extinction due to logging in their critical habitat. 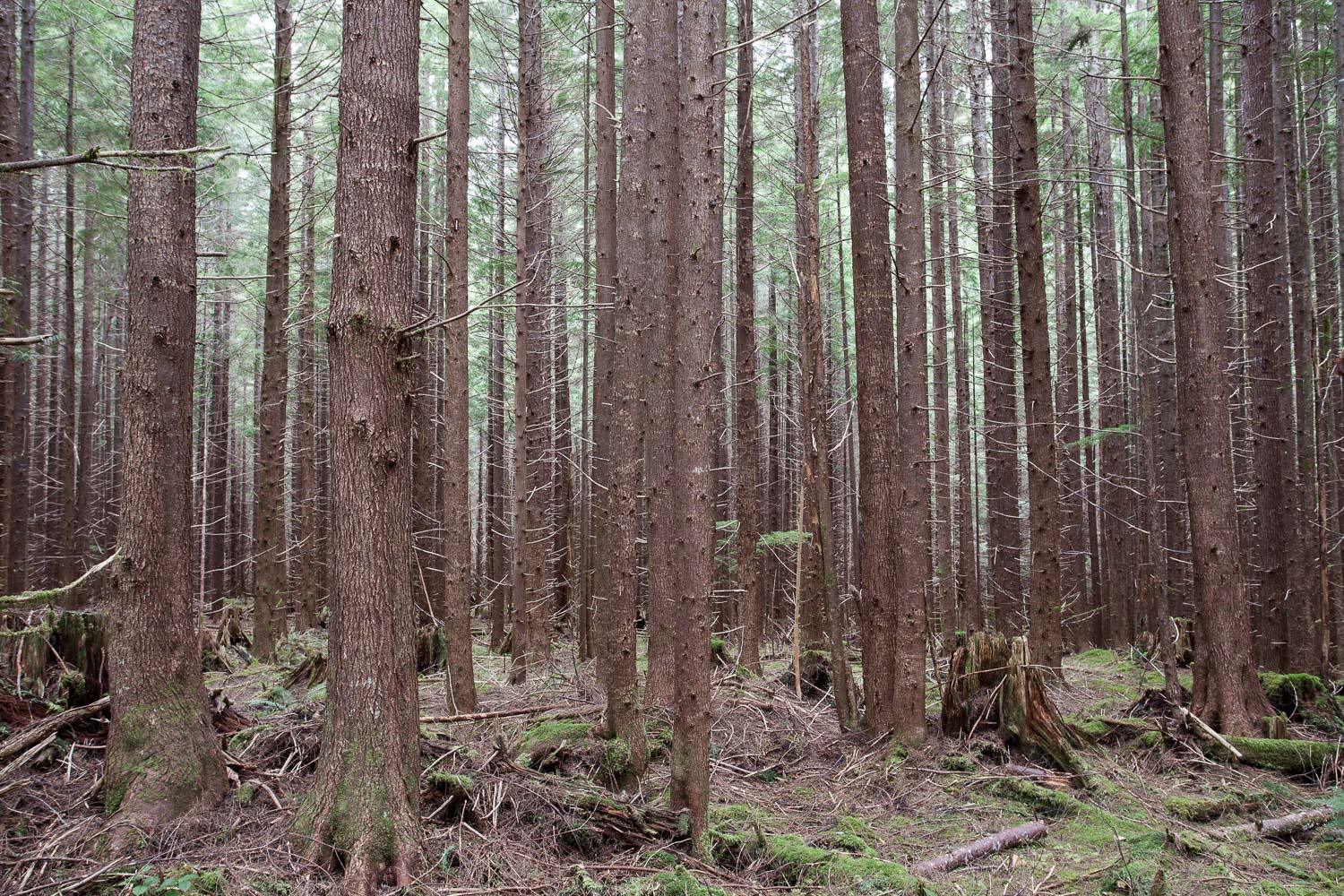 BC’s official greenhouse gas emissions in 2013 were 63 megatons of carbon dioxide, whereas destructive logging practices were responsible for the average release of 49.5 megatons of carbon dioxide annually over a 10 year period. From 2003-2012, forests in BC went from a carbon sink – where they absorbed carbon – to a carbon source. Carbon emissions due to Forestry practices are not counted towards the offical greenhouse gas emissions reported provincially. Only a fraction, as low as 15% of the carbon from logging old-growth forests ends up in solid wood products. Unfortunately, the vast majority of it ends up  in the atmosphere within a few years. Myth #5: "Old-growth logging is necessary to sustain the forest industry." 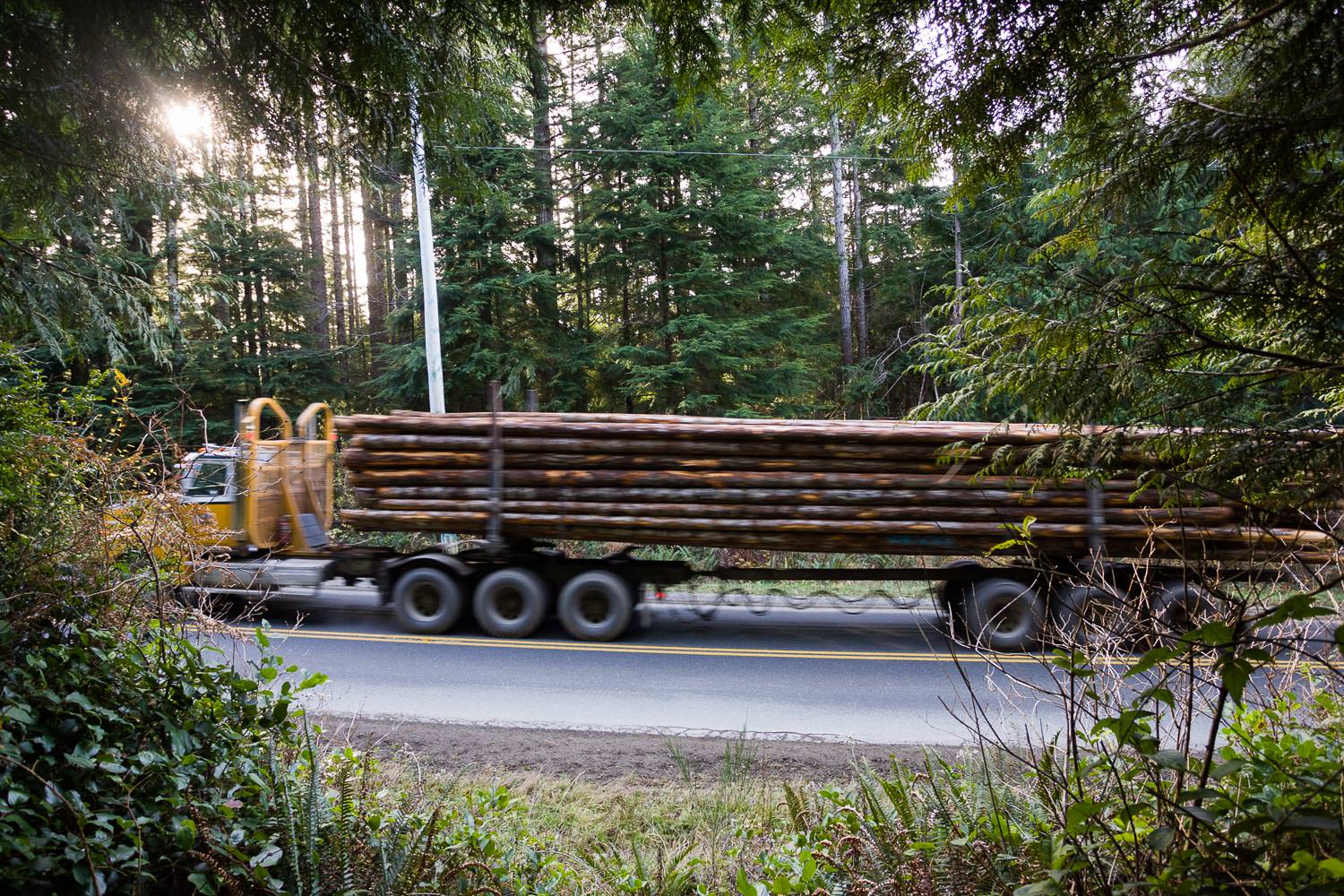 Second-growth logs near Sooke, BC.

Myth #6: "Job losses in forestry are largely due to areas being set aside for conservation."

BC’s forest industry was historically built on logging the biggest and best old-growth stands in the valley bottoms and lower slopes. Over time, the remaining trees have become smaller in size, lower in value and more expensive to reach on steep slopes at high elevations, far away in valley headwaters. Today on Vancouver Island, over 90% of the productive, valley-bottom old-growth forests that historically built the forest industry have now been logged. This has resulted in diminishing returns for the forest industry as expenses have gone up and revenues have declined. Old-growth-dependent sawmills everywhere have shuttered and thousands of forestry jobs have been lost. In the mid 1990’s, almost 100,000 people were directly employed in BC’s forest industry; today, about 60,000 remain. The forest industry has boxed themselves into a corner through their own unsustainable history of overcutting the biggest and best old-growth stands and saying it’s conservationists fault. They think in order to survive, they must log the last unprotected lowland ancient forests.

Around the world – whether one looks at fishing down the food chain or old-growth logging – this pattern of high-grade resource depletion, of taking too much, too fast, has resulted in the collapse of both ecosystems and of resource-dependent communities. Not only do we lose the biodiversity – and water quality in this case – we lose the jobs.

The decline in forestry employment has particularly been exacerbated when the BC Liberal government largely deregulated the forest industry, removing the local milling requirement in 2003. Had it remained, it would have mandated logging companies convert their old-growth mills to handle the maturing second-growth stands. Instead, as the original mills shut down, there has been a mass exodus of raw, unprocessed logs leaving the province for foreign mills, facilitated by the BC Liberals, who marketed these last old-growth stands to buyers in China. 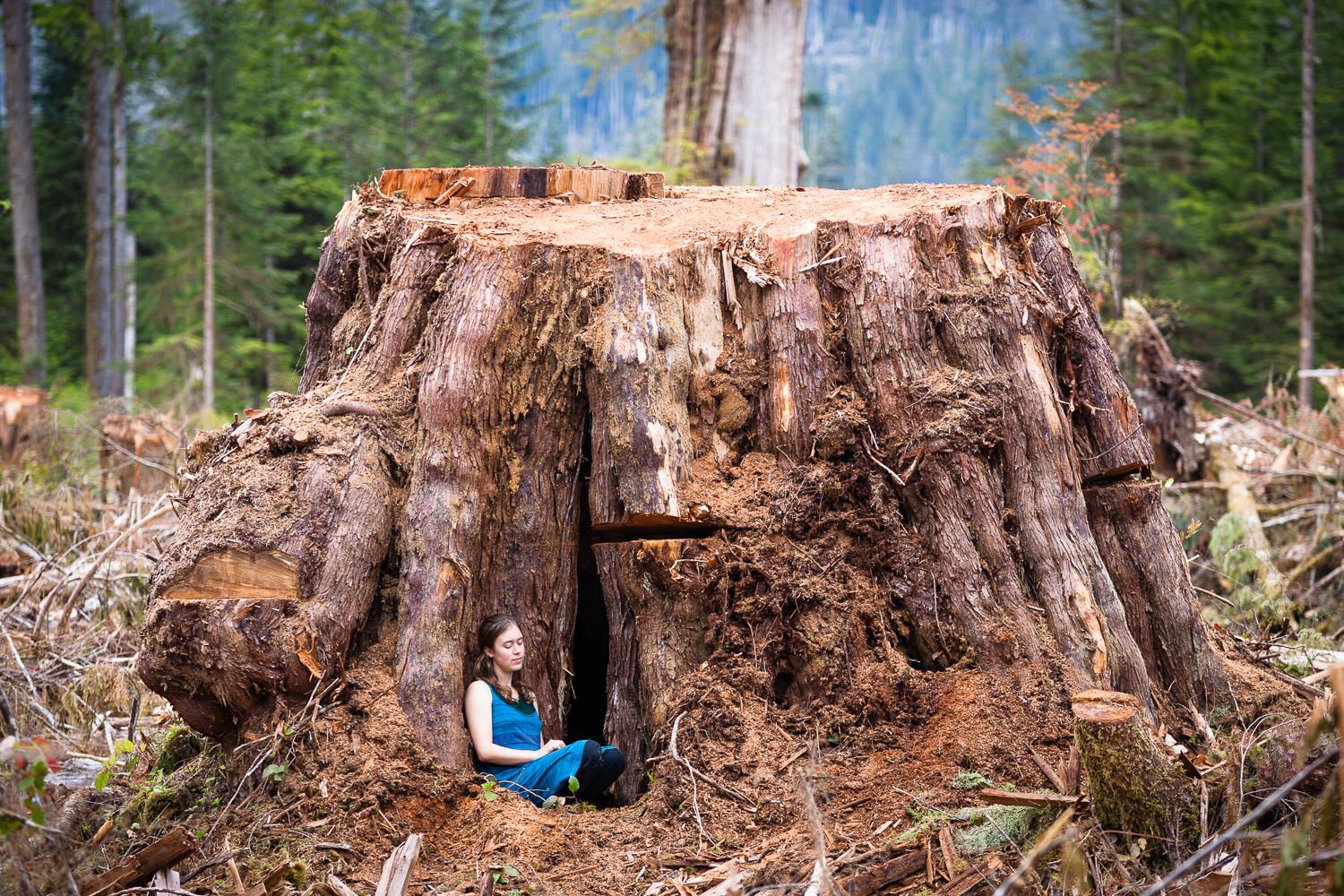