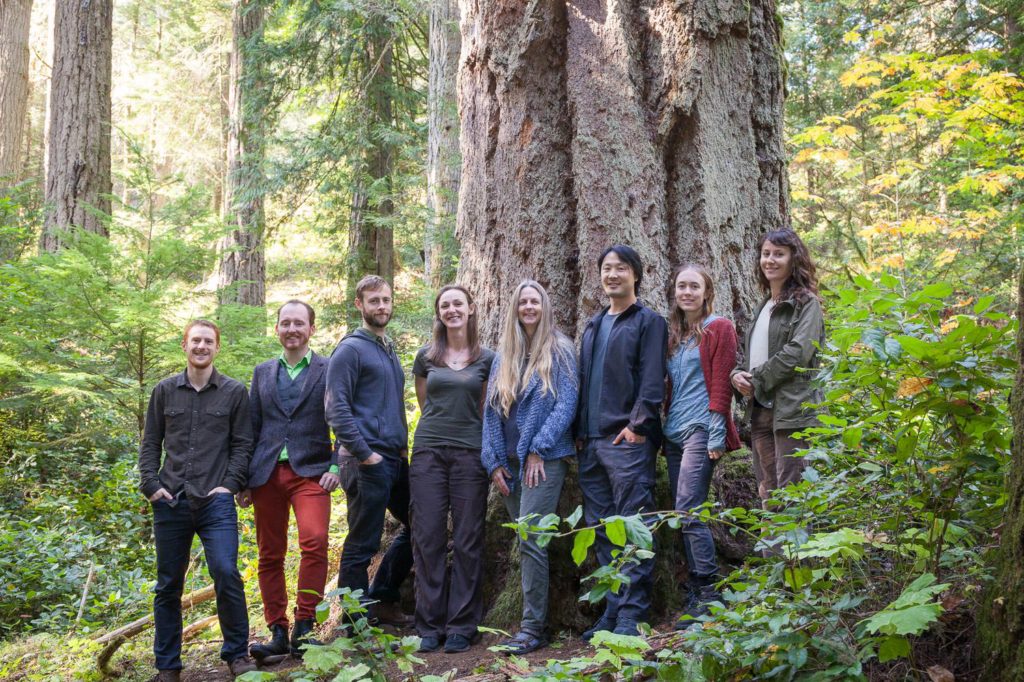 2016 has been the most significant and successful year so far for the Ancient Forest Alliance since our founding in 2010!

Not only did we grow significantly in 2016 thanks to the generosity of our supporters – allowing us to build greater organizational capacity to achieve the enormous policy shift needed to save BC’s old-growth forests and ensure a sustainable, second-growth forest industry – but we’ve also made enormous leaps in the campaign towards actually achieving these goals.

At the Ancient Forest Alliance, we hold a philosophy that for the environmental movement to succeed in its fundamental goals, must expand far beyond engaging its limited “echo chamber” of core environmental activists. We believe environmentalists must place a greater emphasis on green businesses and jobs, solutions and alternatives, and include far more diverse groups of people who are often not considered “environmentalists” in the typical sense – but who nonetheless share an interest in a healthy planet.

This is not a philosophy that comes out of the blue, but from decades of experience in the environmental and ancient forest movement. The Ancient Forest Alliance’s co-founder and executive director, Ken Wu, has been working for 26 years to protect old-growth forests in British Columbia. We recognize that the same old approach of mobilizing already-dedicated environmental activists, by itself, will simply not achieve our goals. A much broader, larger-scale movement is needed involving new and different groups of people. And we’re on our way there, thanks to the dedicated supporters who make up an integral part of this movement!

The Root of Our Work – Why We Do What We Do

BC’s old-growth forests are among the most awe-inspiring natural wonders on Earth – in league with the Serengeti plains of East Africa and the Grand Canyon in America. Next to California’s redwoods, BC’s coastal old-growth forests are the grandest of all forests on Earth. These ancient forests are vital to support unique old-growth dependent species, tourism, clean water, wild salmon, the climate, and the cultures of numerous First Nations, who use old-growth cedars to make canoes, long houses, masks, and countless items of cultural importance.

Unfortunately, large-scale clearcutting still threatens millions of hectares of our old-growth forests. Already 75% of the original, productive old-growth forests have been logged on BC’s southern coast, including well over 90% of the richest forests with the largest trees in the valley bottoms.

Logging old-growth forests is like extracting fossil fuels – it’s a non-renewable resource. This is because under BC’s system of industrial forestry, the ensuing second-growth stands are to be re-logged every 50 to 80 years, never to become old-growth again.

Instead, we should be doing what almost every other western country is doing – harvesting our second-growth forests, which now dominate BC’s productive forest lands. And we should do it sustainably, on much longer rotations, while fostering a value-added, second-growth manufacturing industry that employs British Columbian workers – rather than shipping the raw, unprocessed logs to mills in China and the USA.

A Growing Chorus of Diverse Voices – including Non-Traditional Allies – for Protecting Ancient Forests!

Earlier this year, the BC Chamber of Commerce – the largest business lobby in the province, representing 36,000 businesses – passed a resolution calling on the province to expand the protection of BC’s old-growth forests in order to support the economy. This resolution – a tectonic shift in the political landscape of BC – was the culmination of similar resolutions passed by the Port Renfrew, Sooke, and WestShore Chambers of Commerce as a result of their collaboration with the Ancient Forest Alliance and our work with hundreds of BC’s tourism and local businesses.

We continued our work with forestry workers, including the Private and Public Workers of Canada (PPWC) union and Unifor, in helping to organize various rallies and events, including a rally in Duncan and another in Port Alberni, as well as giving joint presentations at various venues. Solidarity between forestry workers and the environmental movement, spearheaded by the PPWC and the AFA, has been pivotal in order to keep rural forestry communities focused ono the main threats to their jobs – the legacy of deregulation of BC’s forest industry in recent years, massive high-grade overcutting of the biggest best stands in the lower elevations, the lack of incentives and regulations to ensure the value-added manufacturing of the maturing second-growth stands, and the massive export of raw, unprocessed logs to foreign mills in the USA and Asia.

This major expansion of voices for saving ancient forests is no accident, but has been fundamentally driven by the Ancient Forest Alliance’s work to diversify and expand the old-growth forest movement beyond its environmentalist base. In particular, it has been our work with the Port Renfrew Chamber of Commerce to successfully protect the Avatar Grove in 2012, subsequently building a boardwalk there and promoting a major eco-tourism economy based on big trees and old-growth forests, that has been a foundation and a driver for this year’s major progress in rounding up new allies.

We’ve also been working closely with several forestry workers unions and increasing numbers of faith congregations, and have launched a “Chinese-language ancient forest tours program” for the half a million Mandarin and Cantonese speakers in the Vancouver region, as part of our efforts to diversify, grow, and significantly strengthen the ancient forest movement.

Campaign Progressing for a BC Natural Lands Acquisition Fund!

Momentum is also growing for a provincial fund to purchase and protect endangered ecosystems on private lands in BC to add to the protected areas system. Many of BC’s most endangered ecosystems are primarily found on private lands, as are key, extremely rare old-growth forest types. Over 20 major BC conservation and recreational groups, several city councils, as well as the Association of Vancouver Island and Coastal Communities (AVICC) – representing 53 local governments – have now supported the call for the BC government to establish a dedicated provincial fund that can be used to purchase and protect endangered private lands of high environmental and recreational significance.

In a report prepared for the Ancient Forest Alliance, the University of Victoria’s has outlined some potential mechanisms to support such a fund, including the ‘Pop for Parks’ mechanism, which would use the accumulated funds from unredeemed beverage container deposits, worth an estimated $10 million/year or more. We are currently working to expand this movement even further among diverse allies until the policy is ultimately implemented provincially.

We worked to highlight threats to the endangered Central Walbran Valley, the Edinburgh Grove and Eden Grove, all near Port Renfrew, through the news media and with photos and videos, as well as to the Echo Lake Ancient Forest near Mission, which is threatened by road-building and logging plans. We used a small drone to take a lot of photos of these

This summer, preliminary logging surveys were undertaken and road-building scheduled to occur by Echo Lake, an extremely rare, lowland old-growth forest about 2 hours east of Vancouver between Mission and Agassiz. Echo Lake is part of the drinking watershed for local people, is home to the largest night-roosting site for bald eagles on Earth, and harbours much wildlife including bears, cougars, bobcats, wintering black-tailed deer, osprey, numerous bats, and various Species at Risk. The AFA is working with local landowners and members of the Sts’ailes First Nation in efforts to convince the BC government to protect the endangered north and west sides of the lake.

The Ancient Forest Alliance took some key steps in 2016 to spearhead a coordinated effort to bring together the main environmental groups in BC working to protect our old-growth forests to coordinate efforts. This includes efforts to help support sustainable economic alternatives for First Nations communities as an alternative to logging old-growth forests in their traditional territories. It will take the work of many major organizations to finally end the vast logging of endangered old-growth forests in BC, and we will continue to pursue and expand this initiative as the central endeavour of our organization in 2017.

Through the course of 2016’s boardwalk construction season, the boardwalk progressed significantly with the hard work of numerous volunteers, ultimately being completed in October of 2016 – until a windstorm with hurricane-force winds knocked dozens of trees on the the Lower Avatar Grove boardwalk a week later, covering and damaging the completed boardwalk! No worries though, we plan to clear the Lower Avatar Grove and fix the boardwalk in the spring of 2016, with an official launch of the completed project in the early summer of 2016.

The 2016 boardwalk improvements included the addition of a beautiful new entranceway into the Lower Grove featuring a 12 foot wide viewing platform overlooking the forest, two stairways over roots and high steps in the Upper Grove, walkways over nearly all the areas that flood in wintertime, additional boardwalk over sensitive root systems in both groves, mesh traction to prevent slippage in winter time, and much, much more!

Avatar Grove was protected in 2012 after a two-year long campaign led by the AFA and has now become akin to a “second Cathedral Grove.” Thousands of people visit this spectacular ancient forest all year long, hugely bolstering the local economies of southern Vancouver Island. The Ancient Forest Alliance has been constructing a boardwalk in the Avatar Grove – this project is vital to protect the tree roots and understory from excessive trampling, to enhance visitor safety, and to support the local eco-tourism economy. The boardwalk promotes and facilitates hiking in ancient forests among hundreds of thousands of visitors and makes this unique wilderness area accessible for hiking to a much wider range of people with varying abilities than would otherwise be able to visit, enjoy it, and learn about its ecological significance. The boardwalk also constitutes an important model for sustainable local eco-tourism to help expand participation among Canadians and others in outdoor activities in many areas beyond Avatar Grove.

We have organized a variety of awareness events this year, including three major film screenings of Hadwin’s Judgement in Victoria (attended by over 1000 people),and dozens of other presentations and public events. Launched a the Chinese Language Ancient Forest Tours program, initially involving training for volunteer educators who speak Mandarin or Cantonese to eventually give public tours about the ecology of BC’s old-growth forests in the Vancouver region in Stanley Park and in other locations. We were also honoured to present our Ancient Forest Alliance documentary (produced for the AFA by Roadside Films) at a major film screening and forum with over 400 people at the Vancouver International Mountain Film Festival’s ‘Back to the Roots’ event at the Rio Theatre. We also participated in a number of major community events, including Creatively United for the Planet and ROOT Victoria in Victoria, and Earth Day, Car Free Day, Big Trees Weekend, and All Beings Confluence in Vancouver.

Our canvassing teams in Victoria and Vancouver are also doing an amazing job of raising awareness and grassroots funding to sustain our campaigns!

On April 28th the Vancouver Natural History Society (Nature Vancouver) awarded the Ancient Forest Alliance’s executive director Ken Wu for his 26 years of old-growth forest activism. Past recipients of the Frank Sanford Award for Community Service include the late mountaineer and conservationist John Clarke, journalist Larry Pynn, and outdoor writer Jack Christie. Amazingly, the organization is 98 years old, dating back to 1918! They far predate the modern environmental movement, and many of the members are “ecologist elders” with tremendous knowledge and insight on a vast array of natural history subjects. Board members Daphne Nagorsen and David Cook presented the award to Ken.

As we transition into 2017 and the lead-up to the provincial election, we will be focused on continuing to broaden and strengthen the ancient forest movement to exert the necessary pressure on government to ensure large-scale comprehensive protection of BC’s endangered old-growth forests and sustainable, value-added second-growth forestry jobs.

With our increased capacity thanks to our generous supporters, we’ve been able to build a much broader, diverse and ultimately more powerful movement that will have the strength to ensure the protection of our last old-growth forests and ensure a sustainable, second-growth forest industry. Thank you for standing with us.