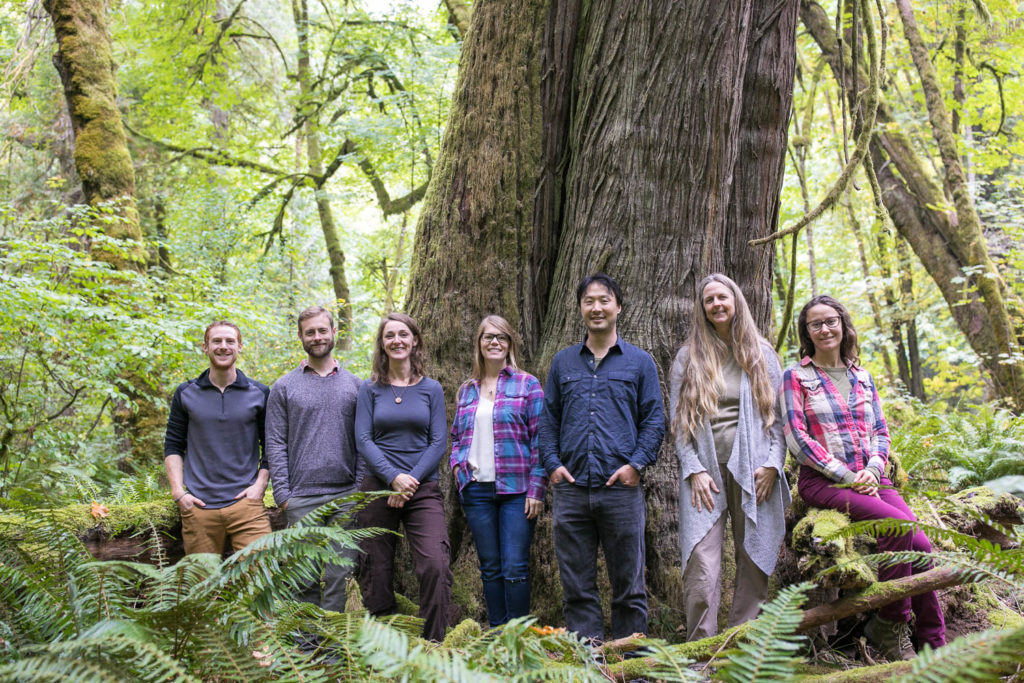 AFA 2017 staff in the old-growth forests of Goldstream Park.

2017 has been one of the most important years for the AFA’s ancient forest campaigns yet. With a formidable support base, strong financial foundation, and incredibly dedicated team, the AFA has grown from a small, grassroots organization to a conservation campaign powerhouse, rivaling much larger and well-established organizations in our impact. Together we have accomplished much that we can be proud of and are seeing changes that give us real hope for the future of our forests.

With a new government at the helm in BC, the AFA is spearheading a coordinated effort in a partnership with other environmental groups to engage the new government to shape legislation and policies to achieve old-growth protection and ensure a rapid transition to a sustainable, value-added, second-growth forestry sector. We continued to bring attention to the ongoing crisis facing ancient forests through expeditions into unprotected old-growth stands, photos and videos, public outreach and education, and engagement with the news media.

Finally, there has been an increased expansion in broad-based support for old-growth protection in 2017 – in large part due to the Ancient Forest Alliance’s cutting-edge initiatives to engage constituencies far beyond the core environmental movement. We have an increasingly diverse range of non-traditional allies, including chambers of commerce, businesses, municipalities, unions, scientists, and First Nations. We also launched Chinese-language tours to engage the half a million Mandarin and Cantonese speakers in the Lower Mainland about old-growth forest ecology, conservation issues, and ways they can support the campaign. 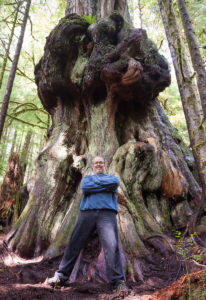 John Horgan in front of the Gnarly Tree at Avatar Grove in 2010.

The Ancient Forest Alliance welcomed the new British Columbia NDP government in July, regarding its Confidence and Supply Agreement with the BC Green Party, and the appointment of Scott Fraser and George Heyman to key cabinet positions – both of whom have stood up for old-growth forest protection in the past – as well as Premier John Horgan who also previously spoke out for Avatar Grove and old-growth protection with the AFA while in Opposition. We believe this new government presents the best opportunity in BC’s history to finally protect endangered old-growth forests and ensure a sustainable, second-growth forest industry. Since the election, we have been working hard to educate decision-makers and influence the new BC government’s forestry and conservation policies.

In the lead-up to the 2017 provincial election, we published a pre-election old-growth forest and sustainable forestry policy report card, illustrating where each political party stood in terms of their past policy track-record and what they were promising in their election platform.

Immediately after the new government took power, we developed a 10-point policy brief for the new government and presented our policy recommendations with the Sierra Club of BC and the Wilderness Committee Minister of Forests, Lands, Natural Resource Operations and Rural Development, Doug Donaldson; Minister of Indigenous Relations and Reconciliation, Scott Fraser; and Green Party MLAs Sonia Furstenau and Adam Olsen. The AFA also developed a policy brief outlining the need and options for implementing a provincial land acquisition fund to purchase and protect endangered ecosystems on private lands for the Minister of Environment and Climate Change Strategy, George Heyman.

In March, our allies at the Public and Private Workers of Canada (PPWC), representing thousands of forestry workers across BC, passed a resolution calling on the BC government to protect Vancouver Island’s old-growth forests, while ensuring a sustainable, value-added second-growth forest industry, an end to raw log exports, and support for First Nations community development. In doing so, the major forestry union joined the thousands of businesses (BC Chamber of Commerce), mayors and city councils (Union of BC Municipalities), First Nations, and conservation groups across BC calling on the provincial government to increase protection for BC’s endangered old-growth forests.

The AFA stood in solidarity with members of the PPWC and Unifor forestry unions at a sustainable forestry rally in front of the BC Legislature in April and at a September rally in Errington on Vancouver Island in protest of raw log exports following the shut down and shift reductions at their Long Hoh and Ladysmith mills, due to a shortage of logs.

Since the 2017 provincial election, the AFA has taken the lead in bringing together other environmental groups working on old-growth protection to foster cooperation and increase the impact of our efforts to lobby the new government. Together, we’ve supplied joint briefings to orientate the BC NDP and the BC Green Party around key old-growth issues and collaborated on
will continue to work with them to help support sustainable economic alternatives for First Nations communities as an alternative to logging old-growth forests in their traditional territories.

The AFA family has grown!

In February, we hired a stellar new Forest Campaigner, Andrea Inness, who is just as passionate about protecting old-growth forests as we are. Andrea’s background in community outreach, communications, and grassroots campaigning, combined with a Masters of Environmental Management, makes her a great addition to the team. Our amazing Victoria Canvass Manager, Tiara Dhenin, has also taken on an expanded role at AFA, helping Joan Varley, our Administrative Director, in the office and supporting our campaigners. Currently completing a Masters of Business Administration in Community Economic Development, Tiara is bringing a wealth of knowledge and skill to the AFA’s operational and community outreach efforts.
Our tireless canvassers in Victoria and Vancouver also expanded our grassroots donor base by thousands more citizens in neighbourhoods throughout the region!

The AFA team has continued to explore and document unprotected old-growth stands, including East Edinburgh Mountain near Port Renfrew; Parthenon Grove, an incredible forest of towering cedars in the inland temperate rainforest east of Prince George; and Echo Lake near Mission, where logging road construction has unfortunately begun. We also located the remarkable Jurassic Grove, a monumental stand of ancient forest north of Jordan River, and the enchanted FernGully Grove, one of the finest and last unprotected stands of old-growth Sitka spruce groves on Vancouver Island with an 11-foot-wide, near-record size Sitka spruce, located just a 10-minute drive from Port Renfrew.

In August, after four years of hard work involving hundreds of volunteers, we completed the Avatar Grove boardwalk near Port Renfrew on Vancouver Island. Built with generous support from the Pacheedaht First Nation band, businesses and individual donors, the boardwalk enhances visitor safety, protects the tree roots and vegetation from excessive trampling, and supports the area’s eco-tourism industry by providing public access to one of the most spectacular old-growth forests in North America!

We have also continued to lead old-growth hikes, ecology tours, and presentations and have had excellent engagement in news media throughout the year, from the local to the international level. In May, for example, AFA staff and some of Vancouver Island’s most stunning ancient forests were showcased in Al Jazeera (the BBC of the Middle East) in a feature by Canadian journalist John Zada. We also gave presentations at Simon Fraser University, Robinson’s Outdoor Store in Victoria, Patagonia Vancouver, the University of Victoria, the Duncan Chamber of Commerce, the PPWC Environmental Reps gathering, and participated in awareness-raising events with allies such as the Mountain Caribou Initiative.

In November, we held a Rally & Info Night for Ancient Forests and Sustainable Forestry Jobs with over 300 people at Alix Goolden Hall in Victoria. Campaigners from the AFA, Sierra Club BC, and Wilderness Committee were joined by speakers from the Sooke, WestShore and Port Renfrew Chambers of Commerce, Joe Martin from the Tla-o-qui-aht First Nation, Robert Morales, Hul’qumi’num Treaty Group Chief Treaty Negotiator, Arnie Bercov, President of the Public and Private Workers of Canada (PPWC) forestry union, and Dr. Andy MacKinnon, Metchosin City Councillor and forest ecologist. The rally sent an unequivocal message to the NDP government that British Columbians from diverse segments of society expect the new provincial government to make BC’s ancient forests and sustainable forestry jobs a first-rate priority!

2018 promises to be a critical turning-point in the AFA’s ancient forest campaign. Not only will we continue to explore and document endangered, unprotected old-growth forests and support local activists working to protect them, we also plan to significantly expand our engagement of First Nations bands across the coast working towards conservation financing solutions and land use plan modernization; systematically expand our engagement of non-traditional allies, including faith and multicultural groups, chambers of commerce, unions and tourism associations; and launch massive public outreach and mobilization efforts through news media, rallies, presentations, public events, hikes and take-action initiatives. But we couldn’t do any of it without the encouragement and generosity of our amazing supporters like you!