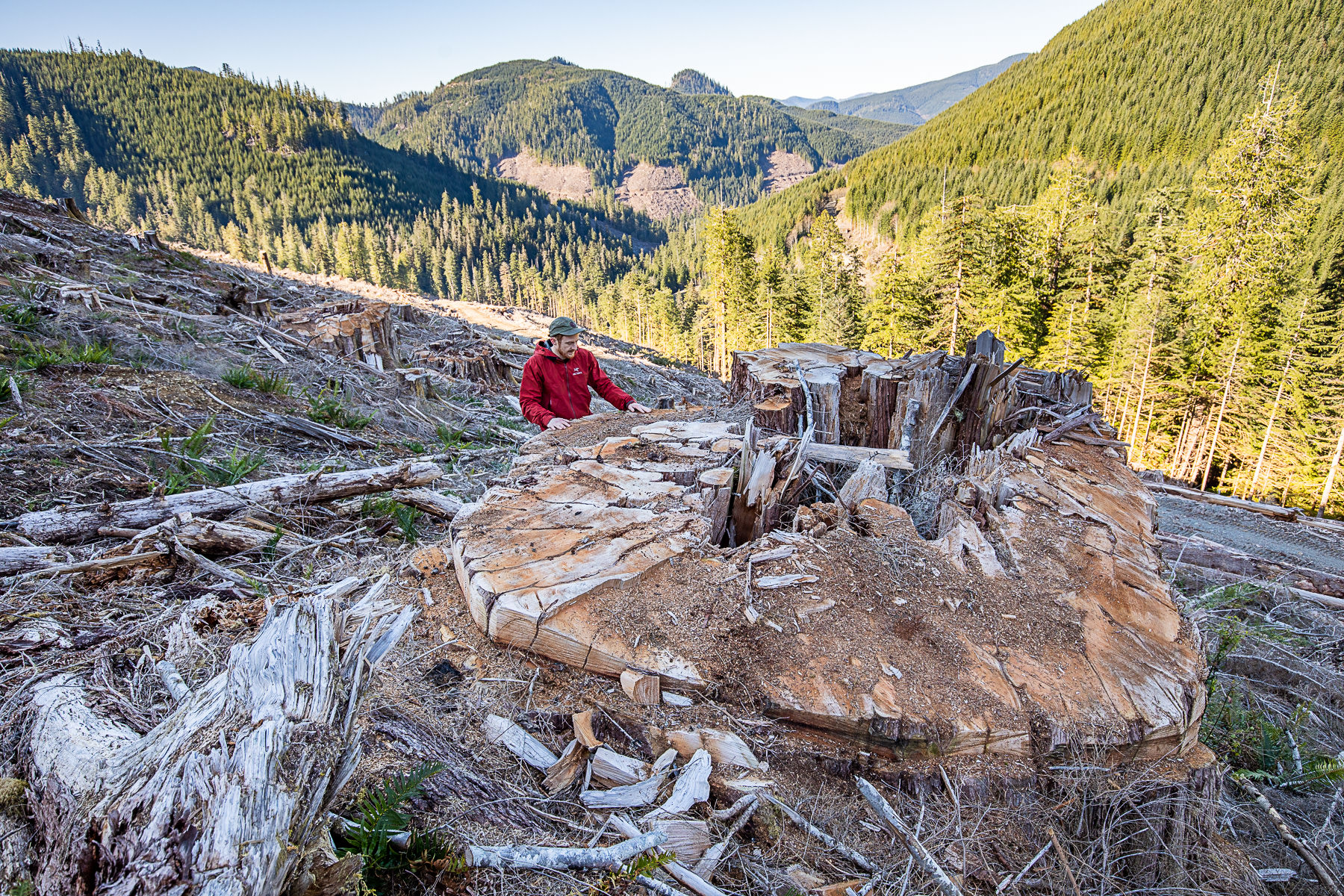 Unceded Lekwungen territories/Victoria, BC – Conservationists with the Ancient Forest Alliance are urging the BC NDP government to immediately halt logging in BC’s most at-risk old-growth forests and commit funding for old-growth protection following the destruction of some of Vancouver Island’s grandest ancient forests along Haddon Creek in the Caycuse River watershed.

On an exploration to the area earlier this month, Ancient Forest Alliance (AFA) campaigner and photographer TJ Watt visited and photographed the fallen remains of a grove of ancient redcedars he’d first explored and documented in April while still standing. The expeditions resulted in shocking before-and-after images of the once-towering giants.

“It was truly an incredible and unique grove,” stated Watt. “I was stunned by the sheer number of monumental redcedars, one after another, on this gentle mountain slope. Giant cedars like these have immense ecological value, particularly as wildlife habitat, and important tourism and First Nations cultural value. Yet, the BC government continues to allow irreplaceable, centuries-old trees to be high-graded for short-term gain while they talk about their new old-growth plan.”

Located southwest of Cowichan Lake and east of Nitinat Lake in Ditidaht First Nation territory, the Caycuse watershed hosts some of the grandest forests on the South Island, rivalling the renowned Avatar Grove near Port Renfrew or the Walbran Valley.

The now clearcut grove was part of a 33.5-hectare cutblock near Haddon Creek, located in Tree Farm Licence 46, which is held by logging company Teal Jones Group. New roads are also being built into adjacent old-growth, which will see more of BC’s iconic big tree forests logged.

Earlier this year, the BC government appointed an independent panel to conduct a strategic review of BC’s old-growth management policies. The final report, released in September, contains 14 recommendations including immediate steps to protect BC’s most endangered old-growth ecosystems within six months and a paradigm shift in the province’s forest management regime that prioritizes biodiversity and ecosystem integrity. On the campaign trail in October, the BC NDP promised to implement all 14 recommendations in their entirety.

As a first step, the province also announced two-year logging deferrals in nine areas covering 353,000 hectares; however, only 3,800 ha or about one percent of the deferred areas consist of previously unprotected, productive old-growth forest.

“With less than three percent remaining of BC’s original, big-tree old-growth forests, the NDP government must work quickly – as soon as Cabinet is sworn in this week – to engage Indigenous Nations, whose unceded lands these are, and enact further deferrals in critical areas while a comprehensive old-growth strategy is developed,” stated AFA campaigner Andrea Inness.

The Ancient Forest Alliance is also calling for significant funding to be allocated in Budget 2021 to facilitate negotiations with First Nations on additional deferral areas and to support Indigenous Protected Areas, Indigenous-led land-use planning, and economic diversification in lieu of old-growth logging, as well as the purchase and protection of old-growth forests on private lands.

First Nations leaders, including the Union of BC Indian Chiefs (UBCIC), are also demanding the BC government work with Indigenous Nations to expand deferrals in threatened old-growth forests and provide First Nations with dedicated funding to protect and steward their lands while pursuing conservation-based businesses and economies, as outlined in a UBCIC resolution passed in September.

“The BC NDP has promised sweeping changes by implementing all of the Old Growth Panel’s recommendations,” stated Inness. “Now they need to put their money where their mouth is by fully funding Indigenous-led old-growth conservation and the transition to a sustainable, value-added, second-growth forest industry. Otherwise we can expect more irreplaceable groves like the one in the Caycuse watershed to be destroyed.”

Old growth forests are integral to British Columbia for ensuring the protection of endangered species, climate stability, tourism, clean water, wild salmon, and the cultures of many First Nations. At present, over 79% of the original productive old-growth forests on BC’s southern coast have been logged, including well over 90% of the valley bottoms where the largest trees grow.  Only about 8% of Vancouver Island’s original old growth forests are protected in parks and Old Growth Management Areas.

See the Union of BC Indian Chiefs September 2020 resolution on old-growth forests: https://ancientforestalliance.org/wp-content/uploads/2020/10/UBCIC-Resolution-2020-23.pdf

The AFA is calling on the BC NDP government to protect the ecological integrity of BC’s old-growth forests while maintaining jobs and supporting communities by: implementing a science-based plan to protect endangered old-growth forests; providing financial support for First Nations’ sustainable economic development as an alternative to old-growth logging and formally recognizing First Nations’ land use plans, tribal parks, and protected areas; creating a provincial land acquisition fund to purchase and protect endangered ecosystems on private lands; and curbing raw log exports and providing incentives for the development of value-added, second-growth wood manufacturing facilities to sustain and enhance forestry jobs. 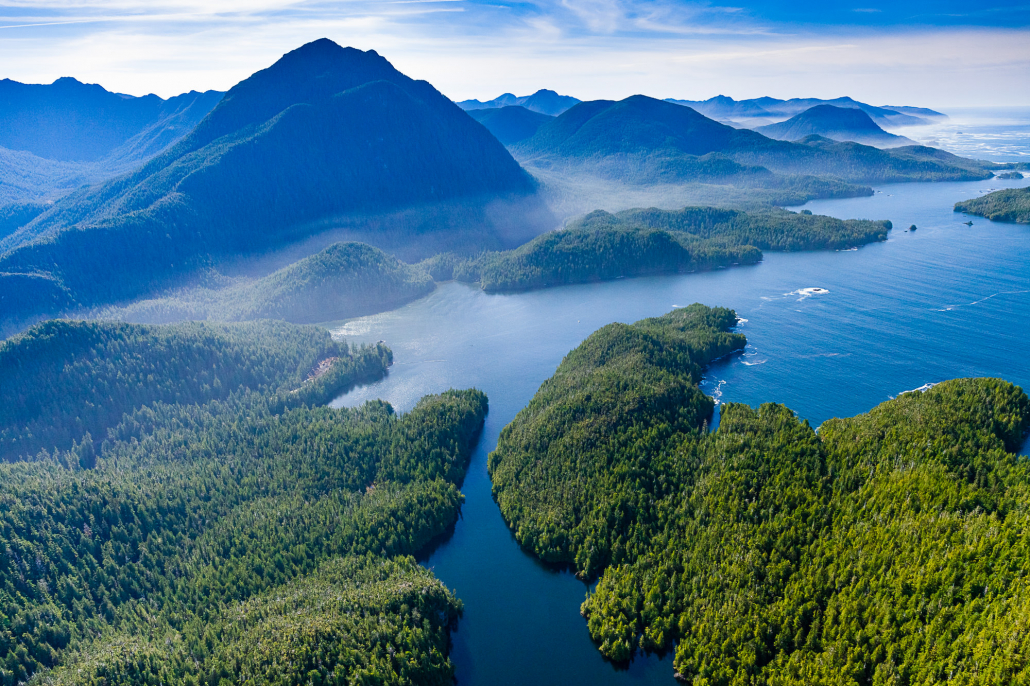 Dec 9 2022
The AFA commends the BC government for committing to protecting 30% of lands in the province by 2030, including through the creation of new Indigenous Protected and Conserved Areas, which would double what is currently protected in legislated areas in BC. A directive has also been given to “develop a new conservation financing mechanism to support protection of biodiverse areas.”
END_OF_DOCUMENT_TOKEN_TO_BE_REPLACED
Media Release
https://ancientforestalliance.org/wp-content/uploads/2022/12/1-Klaskish-Inlet-Vancouver-Island.jpg 1333 2000 Rachel Ablack https://ancientforestalliance.org/wp-content/uploads/2014/10/cropped-AFA-Logo-1000px.png Rachel Ablack2022-12-09 16:45:282022-12-09 16:49:11BC Government Commits to Doubling the Protection of Lands in BC to 30% by 2030 and Creating a New Conservation Financing Mechanism to Help Establish IPCA’s

Nov 30 2022
BC has a chance to protect the most endangered ecosystems and promote community economic, social and cultural well-being linked to nature conservation - and also to finally end the War in the Woods over old-growth forests.
END_OF_DOCUMENT_TOKEN_TO_BE_REPLACED
Media Release
https://ancientforestalliance.org/wp-content/uploads/2022/11/Ken-Wu-Jurassic-Grove.jpg 1333 2000 TJ Watt https://ancientforestalliance.org/wp-content/uploads/2014/10/cropped-AFA-Logo-1000px.png TJ Watt2022-11-30 16:29:062022-11-30 16:29:57Before COP15, Conservation Groups call on BC Government to Commit to Funding and Targets to Expand Protected Areas in BC

Nov 3 2022
Yesterday the BC government released new and misleading statistics about old-growth logging on the one year anniversary of its science panel’s recommendations that logging should be deferred on millions of hectares of the most at-risk old-growth forests in BC.
END_OF_DOCUMENT_TOKEN_TO_BE_REPLACED
Media Release
https://ancientforestalliance.org/wp-content/uploads/2022/11/old-growth-deferral-logging-2022.jpg 1000 1500 Rachel Ablack https://ancientforestalliance.org/wp-content/uploads/2014/10/cropped-AFA-Logo-1000px.png Rachel Ablack2022-11-03 13:05:432022-11-03 14:01:16Spin-filled Announcement Reveals BC Government’s Failure to Ensure Net Gains in Old-Growth Logging Deferrals