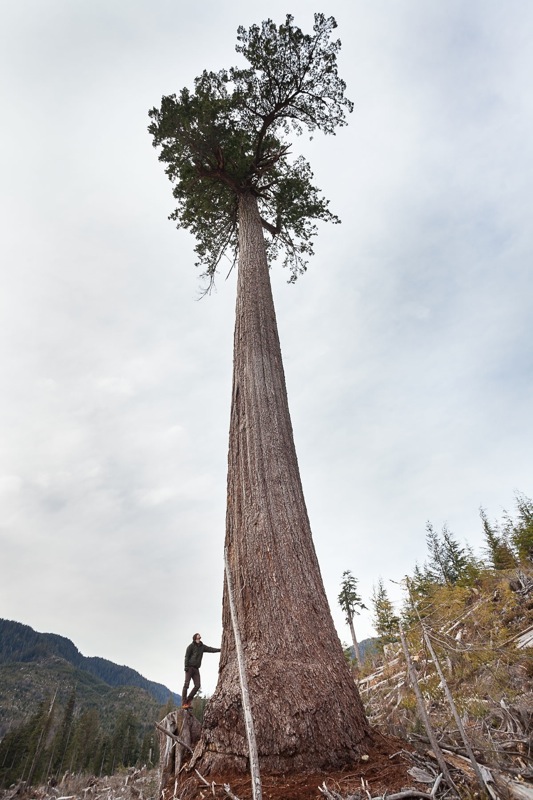 Port Renfrew – Conservationists with the Ancient Forest Alliance (AFA) have found and measured what appears to be Canada’s second largest recorded Douglas-fir tree, nick-named “Big Lonely Doug”. Preliminary measurements of the tree taken yesterday found it to be about 12 meters (39 feet) in circumference or 4 meters (13 feet) in diameter, and 69 meters (226 feet) tall. Ministry of Forests staff will visit the site and take official measurements of the tree in early April. Big Lonely Doug is estimated to be about 1000 years old, judging by nearby 8 feet wide Douglas-fir stumps in the same clearcut with growth rings of 500-600 years.

“This may be the most significant big tree discovery in Canada in decades! This is a tree with a trunk as wide as a living room and that stands taller than downtown skyscrapers,” stated TJ Watt, AFA photographer and campaigner, who first noticed the exceptional tree several months ago before returning to measure it with AFA co-founder Ken Wu yesterday. “Big Lonely Doug’s total size comes in just behind the current champion Douglas-fir, the Red Creek Fir, the world’s largest, which grows just one valley over.”

“The fact that all of the surrounding old-growth trees have been clearcut around such a globally exceptional tree, putting it at risk of being damaged or blown down by wind storms, underscores the urgency for new provincial laws to protect BC’s largest trees, monumental groves, and endangered old-growth ecosystems,” stated Ken Wu, AFA executive director. “The days of colossal trees like these are quickly coming to an end as the timber industry cherry-picks the last unprotected, valley-bottom, lower elevation ancient stands in southern BC where giants like this grow.”

Big Lonely Doug grows in the Gordon River Valley near the coastal town of Port Renfrew on southern Vancouver Island, known as the “Tall Trees Capital” of Canada. It stands on Crown lands in Tree Farm Licence 46 held by the logging company Teal-Jones, in the unceded traditional territory of the Pacheedaht First Nation band.

Big Lonely Doug stands alone among dozens of giant stumps – some 3 meters (10 feet) wide – of old-growth western redcedars, Douglas-firs, and western hemlocks, in a roughly 20 hectare clearcut that was logged in 2012. Its largest branch was recently torn off in a fierce wind/snow storm a few weeks ago, with a 50 centimeter wide base (the size of most second-growth trees) and still fresh needles lying on the ground adjacent to the tree.

The world’s largest Douglas-fir tree is the Red Creek Fir, located just 20 kilometers to the east of Big Lonely Doug in the San Juan River Valley. The Red Creek Fir has been measured to be 13.28 meters (44 feet) in circumference or 4.3 meters (14 feet) in diameter, and 73.8 meters (242 feet) tall.

The University of British Columbia runs a “BC Big Tree Registry” which lists the 10 largest trees of each species based on circumference, height, and crown spread. See: https://bigtrees.forestry.ubc.ca/ Judging by the registry of the top 10 largest recorded Douglas-fir trees in BC, Big Lonely Doug has the 2nd-largest timber volume (ie. overall size), the 2nd largest circumference/diameter, and is the 7th tallest for its kind in BC.

Big Lonely Doug was likely left behind as a seed tree or through a logging practice known as “variable retention harvesting”, where companies claim they are “not clearcutting” the forest because they “retain” varying amounts of trees (in this case, two trees, including Big Lonely Doug) in each cutblock. The tree might have also been used as a cable anchor to yard other trees for the logging operation across the clearcut, judging by the long horizontal lines scarred into its bark.

The stand of ancient trees in which Big Lonely Doug grew was part of a 1000 hectare tract of nationally-significant, largely intact old-growth forest on Edinburgh Mountain, home to species at risk including the red-listed or endangered Queen Charlotte Goshawk. While some of the area has been reserved as a core Wildlife Habitat Area for the goshawk and as an Old-Growth Management Area, about 60% of the forests there – including the finest, valley-bottom stands with the largest trees, such as the stand where Big Lonely Doug once grew in – are open to clearcut logging. This area was nicknamed the “Christy Clark Grove” in 2012 after BC’s premier as a strategy to put her on the spot and in the spotlight to have to take responsibility for the fate of this spectacular ancient forest. So far, the premier has failed to ensure the area’s full protection. See photos of this nationally-significant but threatened forest at: https://ancientforestalliance.org/photos.php?gID=16

Government data from 2012 show that about 75% of the original, productive old-growth forests on BC’s southern coast (Vancouver Island and Southwest Mainland) have been logged, including over 91% of the highest productivity, valley bottom ancient stands where the largest trees grow. 99% of the old-growth Douglas-fir trees on BC’s coast have also been logged. See recent “before and after” maps and stats at: https://ancientforestalliance.org/old-growth-maps.php

The BC Ministry of Forests, Lands, and Natural Resource Operations is currently working on following up on a 2011 promise by then-Forests Minister Pat Bell to develop a new “legal tool” to protect the province’s biggest old-growth trees and grandest groves. Such a legal mechanism, if effective and if implemented, would be a greatly welcome step towards protecting BC’s finest stands. More comprehensive legislation would still be needed to protect the province’s old-growth ecosystems on a larger scale, to sustain biodiversity, clean water, and the climate, as the biggest trees and monumental groves are today a very small fraction of the remaining old-growth forests.

BC’s old-growth forests are important to sustain numerous species at risk that can’t live or flourish in second-growth stands; to mitigate climate change by storing two to three times more atmospheric carbon than the ensuing second-growth tree plantations that they are being replaced with; as fundamental pillars for BC’s multi-billion dollar tourism industry; to support clean water and wild salmon; and for many First Nations cultures who use ancient cedar trees for canoes, totems, long-houses, and numerous other items.

The Ancient Forest Alliance is calling on the BC government to protect our endangered old-growth forests, ensure the development of a sustainable, value-added second-growth forest industry (second-growth forest now constitute the vast majority of productive forest lands in BC), and to end the vast export of raw, unprocessed logs to foreign mills.

“The vast majority of BC’s remaining old-growth forests are at higher elevations, on rocky sites, and in bogs where the trees are much smaller and in many cases have low to no commercial value. It’s the valley-bottom, low elevation stands where trees like the Big Lonely Doug grow that are incredibly scarce now. 99% of the old-growth Douglas-fir trees on BC’s coast have already been logged. It’s time for the BC government to stop being more enthusiastic about big stumps than big trees, and for them to enact forest policies that protect our last endangered ancient forest ecosystems,” stated TJ Watt.

Nov 30 2022
BC has a chance to protect the most endangered ecosystems and promote community economic, social and cultural well-being linked to nature conservation - and also to finally end the War in the Woods over old-growth forests.
END_OF_DOCUMENT_TOKEN_TO_BE_REPLACED
Media Release
https://ancientforestalliance.org/wp-content/uploads/2022/11/Ken-Wu-Jurassic-Grove.jpg 1333 2000 TJ Watt https://ancientforestalliance.org/wp-content/uploads/2014/10/cropped-AFA-Logo-1000px.png TJ Watt2022-11-30 16:29:062022-11-30 16:29:57Before COP15, Conservation Groups call on BC Government to Commit to Funding and Targets to Expand Protected Areas in BC

Nov 3 2022
Yesterday the BC government released new and misleading statistics about old-growth logging on the one year anniversary of its science panel’s recommendations that logging should be deferred on millions of hectares of the most at-risk old-growth forests in BC.
END_OF_DOCUMENT_TOKEN_TO_BE_REPLACED
Media Release
https://ancientforestalliance.org/wp-content/uploads/2022/11/old-growth-deferral-logging-2022.jpg 1000 1500 Rachel Ablack https://ancientforestalliance.org/wp-content/uploads/2014/10/cropped-AFA-Logo-1000px.png Rachel Ablack2022-11-03 13:05:432022-11-03 14:01:16Spin-filled Announcement Reveals BC Government’s Failure to Ensure Net Gains in Old-Growth Logging Deferrals