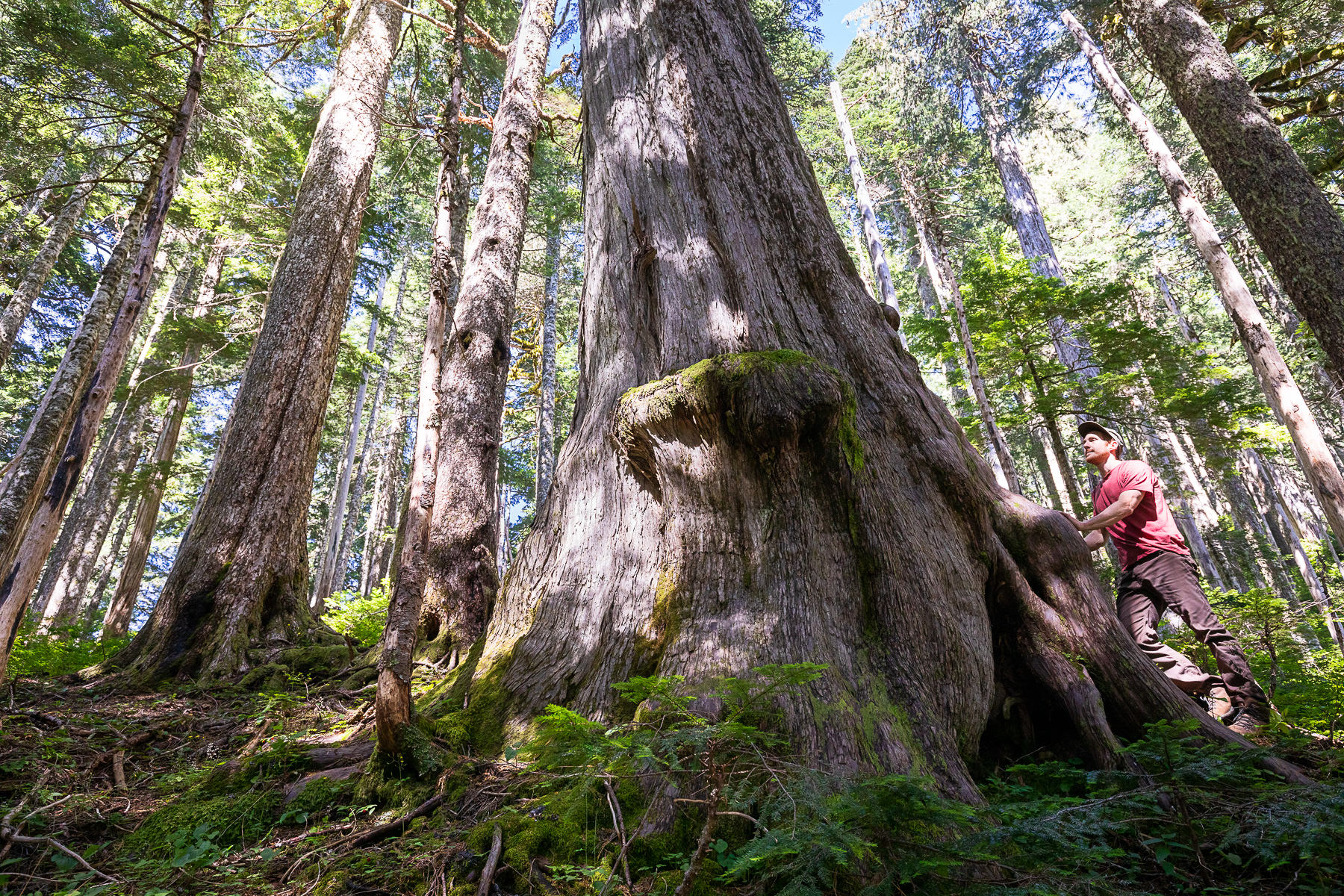 Take action for ancient forests! Send an instant message to the BC government today.

Rare old-growth trees in Fairy Creek headwaters near Port Renfrew, where protesters have been blockading Teal-Jones’ road building efforts since Monday, at risk of logging unless BC government intervenes.

Victoria, BC – Conservationists with the Ancient Forest Alliance (AFA) have identified spectacular, near record-sized ancient yellow-cedars at risk of logging by Teal-Jones Group in the headwaters of Fairy Creek, the last unlogged old-growth valley on southern Vancouver Island (outside of parks), located northeast of Port Renfrew in Pacheedaht territory.

AFA campaigners explored the unprotected headwaters – the site of an ongoing logging blockade – over the weekend and documented the massive trees, which appear to be within a proposed cutblock. One of them measured 9.5 feet in diameter, making it wider than the ninth-widest yellow-cedar in Canada, according to the BC Big Tree Registry. The group also located a number of exceptionally large western hemlocks as well. (See full photo gallery here)

“These are some of the biggest, most remarkable yellow-cedars we’ve ever seen,” stated AFA campaigner and photographer TJ Watt. “Yellow-cedars are the longest-lived life forms in Canada, with the oldest one, located on the Sunshine Coast and cut down in 1993, recorded as being 1,835 years old. At 9.5 feet wide, the largest one we measured in the Fairy Creek headwaters could very well be approaching 2,000 years in age.”

Teal-Jones Group recently began building roads along the ridgeline above Fairy Creek, about four kilometres up from the popular Fairy Lake. The company also has approved permits to build roads extending down into the headwaters and on the ridgeline on the opposite side of the upper valley. While there are currently no pending or approved cutblock applications at this time, falling boundary tape found within the valley headwaters indicates that it could be part of their future plans.

“Blasting these roads in opens the door to future fragmentation of Fairy Creek,” stated TJ Watt. “While thankfully much of the mid-valley is protected in an Old Growth Management Area and Wildlife Habitat Area for threatened marbled murrelets, it’s critical this remarkably rare, unlogged valley remains fully intact and functioning. Most of BC’s old-growth forests exist in small tattered fragments, putting biodiversity and ecosystem integrity at great risk. We can’t allow this to happen here.”

In response to Teal-Jones’ incursion into the Fairy Creek headwaters, a group of protestors set up a blockade on Monday to stop road-building crews and demand that the BC government intervene to protect the entire valley. The protesters, who are not affiliated with any organization, are also calling on the province to immediately release the results of its Old Growth Strategic Review. As a result, the contractor has removed their road-building machines from the site.

“There’s now a growing movement to pressure the NDP government to enact immediate moratoria in the high productivity, most endangered, and the most intact old-growth tracts like Fairy Creek – termed old-growth “hotspots” – while it works to develop its proposed Old Growth Strategy.”

In May, an independent panel tasked with conducting a province-wide Old Growth Strategic Review submitted their recommendations to the province on how best to manage old-growth. As the BC government stalls on releasing those recommendations and announcing its policy intentions, old-growth is becoming increasingly endangered throughout BC.

“A recent independent analysis found that only 2.7% of BC’s high productivity, big tree old-growth forests are standing today and over 75% of what remains is slated for logging in coming years,” stated Inness. “Despite these alarming statistics, the BC government has failed to embrace the study’s findings, has failed to act, and continues to allow logging in these irreplaceable ecosystems.”

“The province needs to recognize the importance of BC’s old-growth forests for ecosystem and climate resilience, as well as human health and wellbeing,” stated Inness. “We need to hear strong commitments from the BC NDP and details of its plan to protect old-growth forests, based on recommendations from the independent panel.”

“BC’s strategy to ‘build back better’ following the economic downturn that’s resulted from COVID-19 must also include an economic plan to help forestry workers transition to a value-added, second-growth industry.”

“We’re calling on the BC government to develop a science-based plan with targets and timelines to protect old-growth forests in all forest types. It’s also vital the province commit funding to support First Nations land-use planning and development of a conservation-based economy tied to the creation of Indigenous Protected Areas and the protection of old-growth forests in their unceded territories.”

Nov 30 2022
BC has a chance to protect the most endangered ecosystems and promote community economic, social and cultural well-being linked to nature conservation - and also to finally end the War in the Woods over old-growth forests.
END_OF_DOCUMENT_TOKEN_TO_BE_REPLACED
Media Release
https://ancientforestalliance.org/wp-content/uploads/2022/11/Ken-Wu-Jurassic-Grove.jpg 1333 2000 TJ Watt https://ancientforestalliance.org/wp-content/uploads/2014/10/cropped-AFA-Logo-1000px.png TJ Watt2022-11-30 16:29:062022-11-30 16:29:57Before COP15, Conservation Groups call on BC Government to Commit to Funding and Targets to Expand Protected Areas in BC

Nov 3 2022
Yesterday the BC government released new and misleading statistics about old-growth logging on the one year anniversary of its science panel’s recommendations that logging should be deferred on millions of hectares of the most at-risk old-growth forests in BC.
END_OF_DOCUMENT_TOKEN_TO_BE_REPLACED
Media Release
https://ancientforestalliance.org/wp-content/uploads/2022/11/old-growth-deferral-logging-2022.jpg 1000 1500 Rachel Ablack https://ancientforestalliance.org/wp-content/uploads/2014/10/cropped-AFA-Logo-1000px.png Rachel Ablack2022-11-03 13:05:432022-11-03 14:01:16Spin-filled Announcement Reveals BC Government’s Failure to Ensure Net Gains in Old-Growth Logging Deferrals