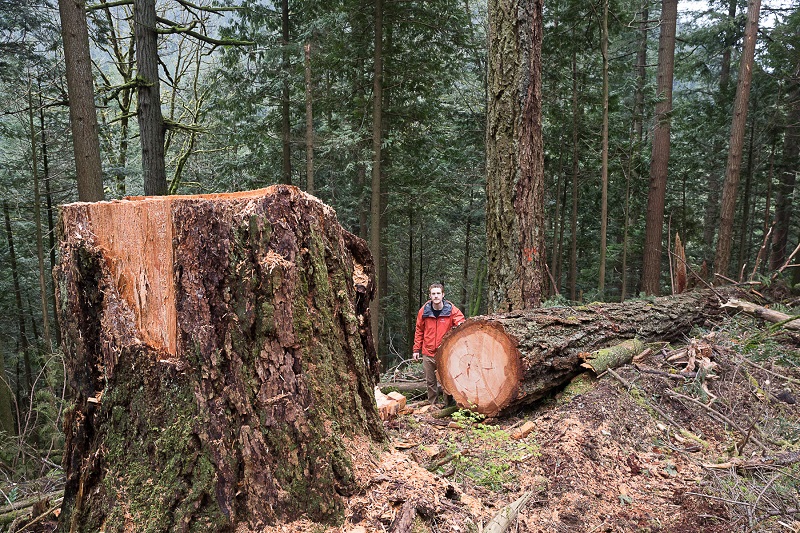 Road construction has started into the endangered old-growth forest of Echo Lake between Mission and Agassiz in preparation for logging.

Conservationists and local landowners are reacting with alarm as a new logging road by C&H Forest Products has progressed over a kilometer into the contentious old-growth and second-growth forests north of Echo Lake as a precursor to logging three planned cutblocks there.

Echo Lake includes some of the last unprotected lowland old-growth forests in the Lower Mainland. It is renowned as the world’s largest night-roosting site for bald eagles, with hundreds of eagles roosting in the old-growth trees around the lake on some nights during the fall salmon run, and is home to much wildlife and several species at risk. The area is also part of a Community Drinking Watershed for local residents and is in the traditional, unceded territory of the Sts’ailes First Nation band, who run the Sasquatch EcoLodge and whose members run eagle watching tours nearby.

And the original campaign video at: https://www.youtube.com/watch?v=HPstV14oZ6s

“The BC government has shown a blatant disregard towards the environmental values and concerns of local residents by shrugging their shoulders and letting the company move ahead with their road-building and logging plans”, stated Susan Ben-Oliel, a private landowner on the east side of the lake. “They are forcing us to broaden our outreach to new allies in preparation for a battle – a battle which could be averted if the BC government took responsibility for finding a solution here, such as a land swap for the licensee involving second-growth forests outside of Echo Lake. I think the BC public is largely unaware and would be horrified to know that this kind of rare, majestic forest is open for logging”.

“Echo Lake is an environmental jewel that includes lowland ancient forest in a region that overwhelmingly consists of second-growth forests, clearcuts, and tiny scraps of old-growth forests with smaller trees growing on high, steep slopes. Today in the Lower Mainland, to find valley-bottom old-growth giant cedars outside of parks is as rare as finding a Sasquatch. It should be a no-brainer that all of the forests around tiny Echo Lake should be protected”, stated Ken Wu, Ancient Forest Alliance executive director.

The road building plans and the three cutblocks were approved by the Forest Service earlier this year. The cutblocks are a mix of old-growth stands and mature second-growth stands with a large number of old-growth veteran trees in them. The road is now over a kilometer long and will eventually be as close as 100 metres from the lake’s north shore and also less than 100 meters from the area’s finest redcedar grove. While the company’s forestry consultant has indicated to local landowners that the company will leave the old-growth Douglas-firs standing and only log the smaller second-growth trees around them, the logging will nevertheless fragment an otherwise intact forested area in a region that is already heavily fragmented. In addition, these are voluntary measures that can be modified, since the old-growth on the north side has no legal protection, and the plan includes a loophole that allows the old-growth trees to still be cut if the company deems it necessary for “safety reasons”.

Importantly, the company has not committed to leaving the old-growth redcedars standing unless they are rotten or have dead tops, and plans to log the healthy old-growth redcedars. Most of the large cedars are found in the “Ancient Cedar Valley,” the finest old-growth stand at Echo Lake that is just beyond the scope of the current 5 year logging plan. However, if the current plans are completed, they would bring forestry operations less than 100 metres away from the Ancient Cedar Valley, which could become next in line for logging. Dozens of enormous redcedars grow in this valley-bottom area on the western side of Echo Lake, which is the lake’s most heavily visited area. The giant trees there are heavily featured in numerous online photos and news articles about Echo Lake.

Another cluster of large, impressive 140+ year old redcedars have also been marked for potential logging near the start of the Echo Lake trail just beyond the boundaries of the private lands on the lake’s east side. Such a move would be another major source of conflict with local landowners.

Currently the company’s cutting permits have expired for the three planned cutblocks, but the company is likely to reapply shortly.

In 2013, after a campaign by local landowners and the Ancient Forest Alliance, the BC government protected 55 hectares of the old-growth forests on the Crown lands on the south side of Echo Lake in an Old-Growth Management Area (OGMA). However, they left out a similar amount of old-growth and mature forests from the OGMA on the north and west sides of Echo Lake within a Woodlot Licence where the ancient trees are now threatened with logging.

Landowners Stephen and Susan Ben-Oliel, who own a private land parcel on one side of the lake, and who draw their drinking water from the area, were informed last summer by consultants hired by C&H Forest Products that the logging company was planning to begin construction of a 1400 metre long logging road in their Community Watershed. The planned road on Crown lands leads to stands of old-growth redcedars and Douglas-firs on the northwest side of Echo Lake. The couple also discovered a series of recently flagged and spray-painted old redcedars alongside the main trail by Echo Lake in preparation for logging. Over a thousand people have now hiked the trail around Echo Lake since 2013, when the Ancient Forest Alliance began organizing guided tours through the area. In 2015, Forest Minister Steve Thomson stated that there were no logging plans for Echo Lake – See Global TV at: https://globalnews.ca/news/1906359/clear-cutting-threatens-echo-lake-eagle-colony/

See various news media articles about Echo Lake from the Vancouver Sun, Globe and Mail, Global TV etc. at the bottom of the campaign page at: www.ProtectEchoLake.com

“The BC government needs to work with the local Woodlot Licensee, First Nations, the adjacent private land owners like myself, and conservationists to ensure the area’s legal protection. This could entail shifting the Woodlot Licence boundaries into an area of second-growth forest with an equivalent timber value and then expanding the Old-Growth Management Area around all of Echo Lake,” stated Susan Ben-Oliel. “The Ministry of Forests has changed the boundaries of the Woodlot Licence in the past, in the 1990’s, and they can do it again if they want to avoid the escalation in the conflict”.

The Ancient Forest Alliance is also calling for a larger provincial plan to protect the remaining endangered old-growth forests across BC while ensuring sustainable second-growth forestry jobs.

In the Lower Mainland, about 80% or more of the original, productive old-growth forests have already been logged, including about 95% of the high productivity, valley bottom ancient forests where the largest trees grow and most biodiversity is found. See before and after maps for BC’s southern coast (Southwest Mainland and Vancouver Island) at: https://ancientforestalliance.org/old-growth-maps.php.

Nov 30 2022
BC has a chance to protect the most endangered ecosystems and promote community economic, social and cultural well-being linked to nature conservation - and also to finally end the War in the Woods over old-growth forests.
END_OF_DOCUMENT_TOKEN_TO_BE_REPLACED
Media Release
https://ancientforestalliance.org/wp-content/uploads/2022/11/Ken-Wu-Jurassic-Grove.jpg 1333 2000 TJ Watt https://ancientforestalliance.org/wp-content/uploads/2014/10/cropped-AFA-Logo-1000px.png TJ Watt2022-11-30 16:29:062022-11-30 16:29:57Before COP15, Conservation Groups call on BC Government to Commit to Funding and Targets to Expand Protected Areas in BC

Nov 3 2022
Yesterday the BC government released new and misleading statistics about old-growth logging on the one year anniversary of its science panel’s recommendations that logging should be deferred on millions of hectares of the most at-risk old-growth forests in BC.
END_OF_DOCUMENT_TOKEN_TO_BE_REPLACED
Media Release
https://ancientforestalliance.org/wp-content/uploads/2022/11/old-growth-deferral-logging-2022.jpg 1000 1500 Rachel Ablack https://ancientforestalliance.org/wp-content/uploads/2014/10/cropped-AFA-Logo-1000px.png Rachel Ablack2022-11-03 13:05:432022-11-03 14:01:16Spin-filled Announcement Reveals BC Government’s Failure to Ensure Net Gains in Old-Growth Logging Deferrals