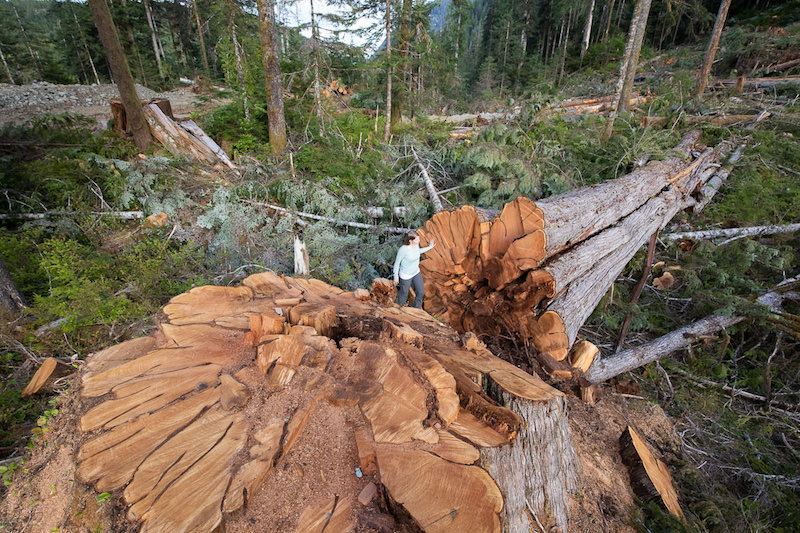 Hundreds of hectares of the grandest old-growth forests in Canada are being logged at breakneck speeds right now in the Nahmint Valley near Port Alberni, including thousands of old-growth western redcedars – some 4.3 meters (14 feet) in diameter – and exceptionally large Douglas-firs. BC’s 5th and 9th widest Douglas-fir trees, according to the BC Big Tree Registry, were found on the expedition to the area.

Port Alberni – Conservationists with the Ancient Forest Alliance (AFA) were dismayed last week to discover that the BC government’s logging agency, BC Timber Sales (BCTS), has auctioned off at least 300 hectares of some of the world’s grandest old-growth forests in the Nahmint Valley for logging, with thousands of old-growth trees already having been cut down this spring. AFA campaigners TJ Watt and Andrea Inness, arborist-conservationist Matthew Beatty, and local Port Alberni conservationists Mike Stini and Ariane Telishewsky, came across the new clearcuts and road-building operations with enormous, 12-foot-wide, freshly cut logs of ancient cedars on May 6.

The cutblocks targeting prime ancient forests were identified by the AFA and are on BCTS-controlled Crown lands and total over 300 hectares in the Nahmint Valley, with some cutlbocks being 30 hectares – or about 30 football fields – in size. The Nahmint Valley is in the territory of the Hupacasath and Tseshaht First Nations bands.

“The BC NDP government is fully in charge of BC Timber Sales’ mandate. For them to let their own logging agency auction off logging rights to some of the largest and oldest endangered trees on Earth is like enabling the slaughter of elephant herds or the harpooning of blue whales. It’s the very opposite of sustainable forest management. The new NDP government needs a serious wake-up call. They need to end the status quo of old-growth liquidation – for starters, BCTS must stop issuing old-growth cutblocks – and instead ensure a sustainable second-growth forest industry,” stated AFA forest campaigner Andrea Inness.

“It’s brutal, what’s happening out there. In advance of our trip I researched where the finest old-growth stands might be located based on Google Earth satellite maps and each one turned out to have a logging cutblock placed on it – cutblocks planned and issued by the BC government’s own logging agency. We visited many spectacular trees on the day we arrived – some trees bigger than even those found in Cathedral Grove – and, by the second day, many of them were already on the ground. It’s a full-on assault. All day long the sounds of chainsaws, drilling machines, and huge trees crashing down boomed throughout the valley,” stated TJ Watt.

The Nahmint Valley is considered a “hotspot” of high-conservation value old-growth forest by conservation groups and is home to Roosevelt elk, black-tailed deer, cougars, wolves, and black bears, as well as old-growth associated species like the marbled murrelet and northern goshawk. The area also supports significant salmon and steelhead spawning runs. The Nahmint is considered by many people to be one of the most scenic areas in BC, with its ancient forests, rugged peaks, gorgeous turquoise canyons and swimming holes, and large and small lakes, and is heavily used by hikers, campers, anglers, and hunters.

“Only about 1% of the original old-growth Douglas-fir stands still remain on BC’s coast, and just about the finest stands are here in the Nahmint Valley. The area is also prime wildlife habitat for so many species. Having explored the forests around Port Alberni for decades, I can say with confidence that the remaining old-growth forests in the Nahmint are a first-rate conservation priority,” said wildlife expert Mike Stini of the Port Alberni Watershed-Forest Alliance.

The NDP’s 2017 election platform states that “In partnership with First Nations and communities, we will modernize land-use planning to effectively and sustainably manage BC’s ecosystems, rivers, lakes, watersheds, forests and old growth, while accounting for cumulative effects. We will take an evidence-based scientific approach and use the ecosystem-based management of the Great Bear Rainforest as a model.” (see page 61 of their platform at: https://action.bcndp.ca/page/-/bcndp/docs/BC-NDP-Platform-2017.pdf). If taken literally and seriously, this would almost certainly result in the protection of the remaining endangered old-growth forest on BC’s southern coast and in the BC Interior, where old-growth forests are far scarcer and more endangered than in the Central and Northern Coast (Great Bear Rainforest) where 85% of the forests (including the vast majority of the old-growth) were set aside in protected areas and under the ecosystem-based management reserve networks.

Several environmental groups, including the Ancient Forest Alliance, Sierra Club BC, and Wilderness Committee, are calling on the BC government to implement a series of policy changes that can be rolled out over both short- and longer-term timelines. This includes a comprehensive, science-based law to protect old-growth forests and financial support for sustainable economic development and diversification of First Nations communities, known as “conservation financing,” while supporting First Nations land use plans. While these longer-term solutions are being developed, an interim halt to logging in old-growth “hotspots” – areas of high conservation value – must be implemented to ensure the largest and best stands of remaining old-growth forests are kept intact while a larger plan is developed.

There are also a number of policies that can be readily implemented more quickly. For example, the NDP government should direct BCTS to discontinue issuance of old-growth cut blocks and support the implementation of conservation solutions in such rare and endangered forests. In addition, there needs to be an effective big tree protection order with buffer zones and forest reserves such as many Old-Growth Management Areas that currently exist only on paper should be made legally binding and the system should be quickly expanded to protect additional endangered old-growth forests. Finally, annual funding needs to be directed to establish a park acquisition fund, which would allow the BC government to purchase and protect private lands of high conservation, cultural or recreational value.

“So far, the new NDP government has, disappointingly, supported the destructive status quo of high-grade old-growth forest liquidation, raw log exports, mill closures, and unsustainable forestry in general. They need to break away from the old unsustainable mindset that has driven the increasing collapse of both ecosystems and rural communities in this province. When it comes to forestry, the NDP have not distinguished themselves from the BC Liberals in terms of any new laws or regulations, and it’s very unwise for them to think they can take the environmental movement for granted and test its patience with excuses, heel-dragging, and PR spin while the destructive status quo rages on. Today there is a viable, potentially sustainable, second-growth forestry alternative that the government can foster, while protecting endangered old-growth forests and supporting the economic diversification of First Nations and rural communities,” stated Ancient Forest Alliance executive director Ken Wu.

In recent times in BC, the voices for old-growth protection have been quickly expanding, including numerous Chambers of Commerce, mayors and city councils, forestry unions, and conservation groups across BC who have been calling on the provincial government to expand protection for BC’s remaining old-growth forests.

BC’s premier business lobby, the BC Chamber of Commerce, representing 36,000 businesses, passed a resolution in May of 2016 calling on the province to expand protection for BC’s old-growth forests to support the economy, after a series of similar resolutions passed by the Port Renfrew, Sooke, and WestShore Chambers of Commerce. See: https://ancientforestalliance.org/news-item.php?ID=1010

Both the Union of BC Municipalities (UBCM), representing the mayors, city and town councils, and regional districts across BC, and Association of Vancouver Island and Coastal Communities (AVICC), representing Vancouver Island local governments, passed a resolution in 2016 calling on the province to protect the Vancouver Island’s remaining old-growth forests by amending the 1994 land use plan. See: https://ancientforestalliance.org/news-item.php?ID=1057

The Public and Private Workers of Canada (PPWC), formerly the Pulp, Paper, and Woodworkers of Canada, representing thousands of sawmill and pulp mill workers across BC, passed a resolution in 2017 calling for an end to old-growth logging on Vancouver Island. See: https://ancientforestalliance.org/news-item.php?ID=1100

Each year, a significant portion of the provincial timber harvest is carried out on BC Timber Sales (BCTS) controlled land through its timber sales program. BCTS, a division of the Ministry of Forests, Lands, Natural Resource Operations and Rural Development (FLNRO), is the BC government’s logging agency that plans and directly issues logging permits for about 20 percent of the province’s merchantable timber on Crown lands, which fall outside of forestry tenures. Under this system, logging rights are granted through competitive auction to the highest bidding company for each timber sale, which provides benchmark costs and prices from the harvest of Crown timber in BC in order to set stumpage rates for tenure holders. The remaining 80 per cent of the province’s annual timber harvest occurs under the timber tenure system through tree farm or forest licences within Timber Supply Areas, woodlot licences, First Nations woodland licences, community forest agreements, or other tenures.

As the BC government retains full control over which cut blocks are auctioned each year through BCTS, the new government should use this control to quickly phase out issuing timber sales in old-growth forests and support implementation of conservation steps. The government should also review alternative ways to set benchmarks, considering broader socio-economic and ecological criteria, and consider how BC Timber Sales can be used to enable solutions for conservation and forestry that support communities.

Nov 30 2022
BC has a chance to protect the most endangered ecosystems and promote community economic, social and cultural well-being linked to nature conservation - and also to finally end the War in the Woods over old-growth forests.
END_OF_DOCUMENT_TOKEN_TO_BE_REPLACED
Media Release
https://ancientforestalliance.org/wp-content/uploads/2022/11/Ken-Wu-Jurassic-Grove.jpg 1333 2000 TJ Watt https://ancientforestalliance.org/wp-content/uploads/2014/10/cropped-AFA-Logo-1000px.png TJ Watt2022-11-30 16:29:062022-11-30 16:29:57Before COP15, Conservation Groups call on BC Government to Commit to Funding and Targets to Expand Protected Areas in BC

Nov 3 2022
Yesterday the BC government released new and misleading statistics about old-growth logging on the one year anniversary of its science panel’s recommendations that logging should be deferred on millions of hectares of the most at-risk old-growth forests in BC.
END_OF_DOCUMENT_TOKEN_TO_BE_REPLACED
Media Release
https://ancientforestalliance.org/wp-content/uploads/2022/11/old-growth-deferral-logging-2022.jpg 1000 1500 Rachel Ablack https://ancientforestalliance.org/wp-content/uploads/2014/10/cropped-AFA-Logo-1000px.png Rachel Ablack2022-11-03 13:05:432022-11-03 14:01:16Spin-filled Announcement Reveals BC Government’s Failure to Ensure Net Gains in Old-Growth Logging Deferrals