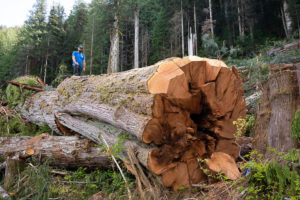 Conservationists with the Ancient Forest Alliance are concerned that old-growth logging in the Nahmint Valley is continuing and that future logging is being planned for the area by the BC government, despite the fact a Forest Practices Board investigation is underway into whether the logging by BC Timber Sales fails to comply with legal orders.

Victoria, BC – The Ancient Forest Alliance is calling on the BC NDP government to halt further logging in the Nahmint Valley near Port Alberni while investigations into potential non-compliance by the BC’s government’s logging agency, BC Timber Sales (BCTS), are currently underway. 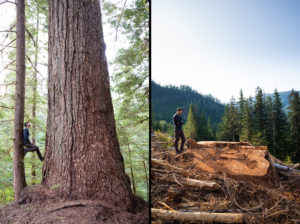 In May 2018, the Ancient Forest Alliance exposed the logging of some of the world’s largest trees by BCTS in Hupacasath and Tseshaht First Nations territory in the Nahmint Valley. Over 300 hectares were auctioned off for logging with some cutblocks being 30 hectares – or about 30 football fields – in size. Thousands of old-growth trees have since been cut, including a Douglas-fir tree measuring 3 metres (9.9 feet) in diameter, which ranked 9th on the BC Big Tree Registry’s list of the widest Douglas-firs in the province.

“After exploring and documenting various old-growth cutblocks planned by BCTS throughout the Nahmint Valley, we submitted a natural resource violation complaint to the Ministry of Forests in June, alleging that BC Timber Sales’ Forest Stewardship Plan fails to meet the results and strategies set out in the Vancouver Island Land Use Plan Higher Level Plan Order that rare and underrepresented plant communities be represented and protected,” stated Ancient Forest Alliance Campaigner and Photographer TJ Watt.

“We also pointed out that one of the primary land use objectives for the Nahmint Valley in the Vancouver Island Summary Land Use Plan includes the retention of a ‘high proportion’ of old forest, including large, old-growth Douglas-fir trees. In addition, the three-metre-wide Douglas-fir that was felled in May, which we estimated to be at least 800 years old, was in violation of BCTS’ “Best Management Practices for Coastal Legacy Trees” policy, which states that the minimum size for retention of Douglas-firs is 2.1 meters. We believe other western redcedars and Douglas-firs in the BCTS-issued cutblocks also exceeded the minimum threshold size for protection.”

An investigation by the Ministry of Forests ensued as a result of the AFA’s complaint, but the results of that investigation have not been made public. The AFA has also yet to receive any information in response to a freedom of information (FOI) request submitted in September, seeking information on the ministry’s investigation, despite the investigation having been completed and the due date for response to the FOI having passed in late November. The Forest Practices Board also recently launched an investigation into the logging in the Nahmint Valley. Meanwhile, BC Timber Sales released its 2018 West Coast Operating Plan in October, outlining additional old-growth timber sales in the Nahmint Valley that have yet to be auctioned off.

“We are deeply concerned about the potential violation, given the abundant ecological, tourism and recreational, and cultural values of the Nahmint Valley and possible negative and long-term impacts on these values,” stated Ancient Forest Alliance Campaigner Andrea Inness. “We are also concerned that BCTS is continuing to engineer future logging cutblocks for the Nahmint Valley despite the results of the ministry’s investigation not having been released and the Forest Practices Board now conducting their own investigation. Given there’s a possibility that the BC government’s logging agency is in violation of its own land use regulations, these future logging plans should be placed on hold until it is determined the law isn’t being broken.”

“Ultimately, however, what’s needed is for the BC government to use its control over BC Timber Sales to discontinue issuance of old-growth timber sales altogether. The ongoing logging of some of Canada’s largest trees and most spectacular ancient forests in the Nahmint Valley is proof that BCTS cannot be trusted to sustainably manage BC’s endangered old-growth forests.”

Background Information:
The Nahmint Valley is considered a “hotspot” of high-conservation value old-growth forest by conservation groups and is home to Roosevelt elk, black-tailed deer, cougars, wolves, and black bears, as well as old-growth associated species like the marbled murrelet and northern goshawk. The area also supports significant salmon and steelhead spawning runs. The Nahmint is considered by many people to be one of the most scenic areas in BC, with its ancient forests, rugged peaks, gorgeous turquoise canyons and swimming holes, and large and small lakes, and is heavily used by hikers, campers, anglers, and hunters.