Posted in: Media Release
Share this far and wide!

Conservationists with the Ancient Forest Alliance are dismayed that new logging has commenced on Edinburgh Mountain, an old-growth “hotspot” of high conservation value near Port Renfrew in Pacheedaht territory on western Vancouver Island. A 15.6 hectare cutblock, featuring old-growth forest with monumental redcedars and Douglas-firs, is being logged by Teal Jones Group and adds to the over 75 hectares of old-growth forest the company has logged on Edinburgh Mountain since 2016. 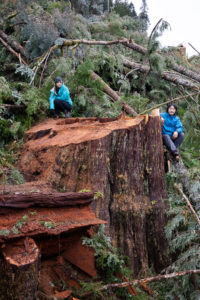 Ancient Forest Alliance (AFA) campaigners visited the cutblock over the weekend and found scores of giant trees cut down, including two-meter (seven-foot) wide cedars and an extremely rare, two-meter-wide, old-growth Douglas-fir, which had previously been photographed by AFA campaigner TJ Watt while still standing.

“The Ancient Forest Alliance is highly concerned about the future of this magnificent area, which includes almost 1,500 hectares of intact old-growth forest,” stated AFA Campaigner and Photographer TJ Watt. “Edinburgh Mountain is one of the largest contiguous tracts of unprotected ancient rainforest on southern Vancouver Island south of Barkley Sound and, without legislated protection, this spectacular forest is being whittled away, clearcut by clearcut.”

The Edinburgh Mountain Ancient Forest, as it’s known by conservationists, is the location of Big Lonely Doug, Canada’s second largest Douglas-fir tree, which stands alone in a clearcut at the base of the mountain, and is important habitat for endangered northern goshawks and marbled murrelets. It also contains one of the finest and most endangered lowland, valley-bottom, old-growth forests left on Vancouver Island: the spectacular Eden Grove.

60 percent of Edinburgh Mountain is available for logging, with the remaining 40 percent in tenuous forest reserves such as Old Growth Management Areas, whose boundaries can be adjusted to allow logging companies access to commercially valuable forests as they run out of timber elsewhere. The government contends that the removal of such protections requires the protection of other, similar forests, but often it results in the protection of lower quality stands with smaller trees than the original stand.

Just 50 meters away from the active cutblock stands a Douglas-fir tree that is the 6th widest Douglas-fir tree on record, according to the BC Big Tree Registry, and the 7th widest when including the Alberni Giant in the Nahmint Valley. While the near record-sized tree is located within a Wildlife Habitat Area, it remains vulnerable to future logging, as the designation legally allows clearcut logging in almost 75% of the reserve. In fact, in 2010 and 2012, some of the largest trees in Canada were logged within this Wildlife Habitat Area.

“The logging of Edinburgh Mountain not only threatens the ecological integrity of the area, it also extinguishes future tourism opportunities for Port Renfrew, a former logging town that has rebranded itself as the Tall Tree Capital of Canada,” stated Watt. “Hundreds of thousands of tourists have come from around the world in recent years to visit ancient forest groves, such as Avatar Grove, and some of Canada’s largest trees near the town. These visitors expect to see ancient forests, not clearcuts. If kept intact, Edinburgh Mountain could offer spectacular and long-term tourism and recreation opportunities for those visitors. Once it’s logged, those economic opportunities disappear too.”

The new logging on Edinburgh Mountain comes at a time when conservationists are still waiting on the BC NDP government to formulate a plan to implement its 2017 election platform commitment to use the ecosystem-based management approach of the Great Bear Rainforest to sustainably manage old-growth forests across the rest of the province.

Old growth forests are integral to British Columbia for ensuring the protection of endangered species, climate stability, tourism, clean water, wild salmon, and the cultures of many First Nations. At present, over 79% of the original productive old-growth forests on BC’s southern coast have been logged, including well over 90% of the valley bottoms where the largest trees grow. Only about 8% of Vancouver Island’s original old growth forests are protected in parks and Old Growth Management Areas.

The AFA is calling on the BC NDP government to protect the ecological integrity of BC’s old-growth forests while maintaining jobs and supporting communities by: implementing a science-based plan to protect endangered old-growth forests; providing financial support for First Nations’ sustainable economic development as an alternative to old-growth logging and formally recognizing First Nations’ land use plans, tribal parks, and protected areas; and curbing raw log exports and providing incentives for the development of value-added, second-growth wood manufacturing facilities to sustain and enhance forestry jobs.