Canada’s fourth-widest tree was found in the Lynn Headwaters Regional Park in North Vancouver, a giant western redcedar that is likely the widest tree found in Canada in over 34 years.

VICTORIA (Unceded Lekwungen Territories) – Two big tree hunters from Vancouver have just identified the fourth-widest known tree in Canada: an ancient western redcedar tentatively measured at over 5.8 metres (19.1 feet) in diameter and well over a thousand years old. Nicknamed “The North Shore Giant”, this ancient colossus was found by Colin Spratt, a Vancouver big-tree hunter, and Ian Thomas of the Ancient Forest Alliance, on an expedition deep into the remote reaches of Vancouver’s Lynn Headwaters Regional Park in the territory of the xʷməθkwəy̓əm (Musqueam), skwxwú7mesh (Squamish), and səl̓ílwətaɬ (Tsleil-Waututh) Nations. 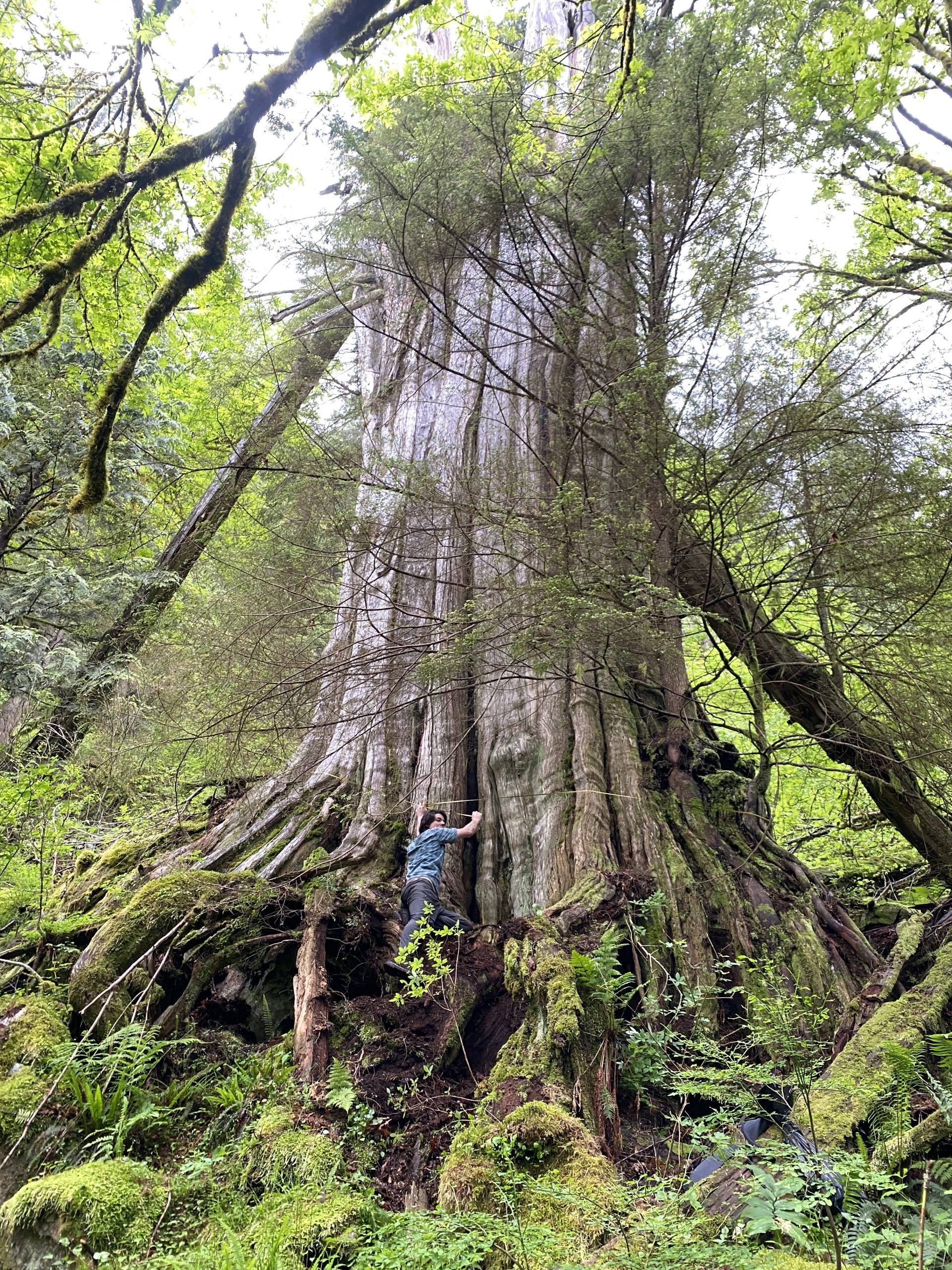 Lynn Valley has long been renowned for its giant trees. In fact, the tallest trees on Earth might once have grown there, but aggressive logging in the 19th and early 20th centuries eliminated most of those superlative forests. Throughout much of Lynn Valley, gargantuan, castle-like stumps are all that remain of the ancient trees that once dominated the region. However, in the depths of the watershed, far from the established trails, are remnants of that original old-growth forest – enormous trees many centuries old, still surviving a stone’s throw from the thriving metropolis of Vancouver.

“Finding this colossal ancient tree just demonstrates the sublime grandeur of these old-growth temperate rainforests,” stated Ancient Forest Alliance researcher Ian Thomas.  “Luckily this incredible being and the impressive grove in which it stands is safe in a park. Most of our richest ancient forests are still unprotected and in danger of being logged. Even now in Canada, in the year 2022, trees as old as this giant, and entire groves like this one, are still being cut down on an industrial scale.”

The terrain is extremely rugged, with sheer cliffs, treacherous boulder fields, steep ravines, and dense underbrush, which has allowed these monumental trees to remain hidden for so long. The North Shore Giant grows on the slopes west of Lynn Creek on a boulder field among other magnificent ancient redcedars. Further groves of giant trees are found nearby, including one containing Canada’s fifth widest known western hemlock, identified mere hours before the North Shore Giant. The area represents one of the most magnificent tracts of productive ancient forest left in BC. 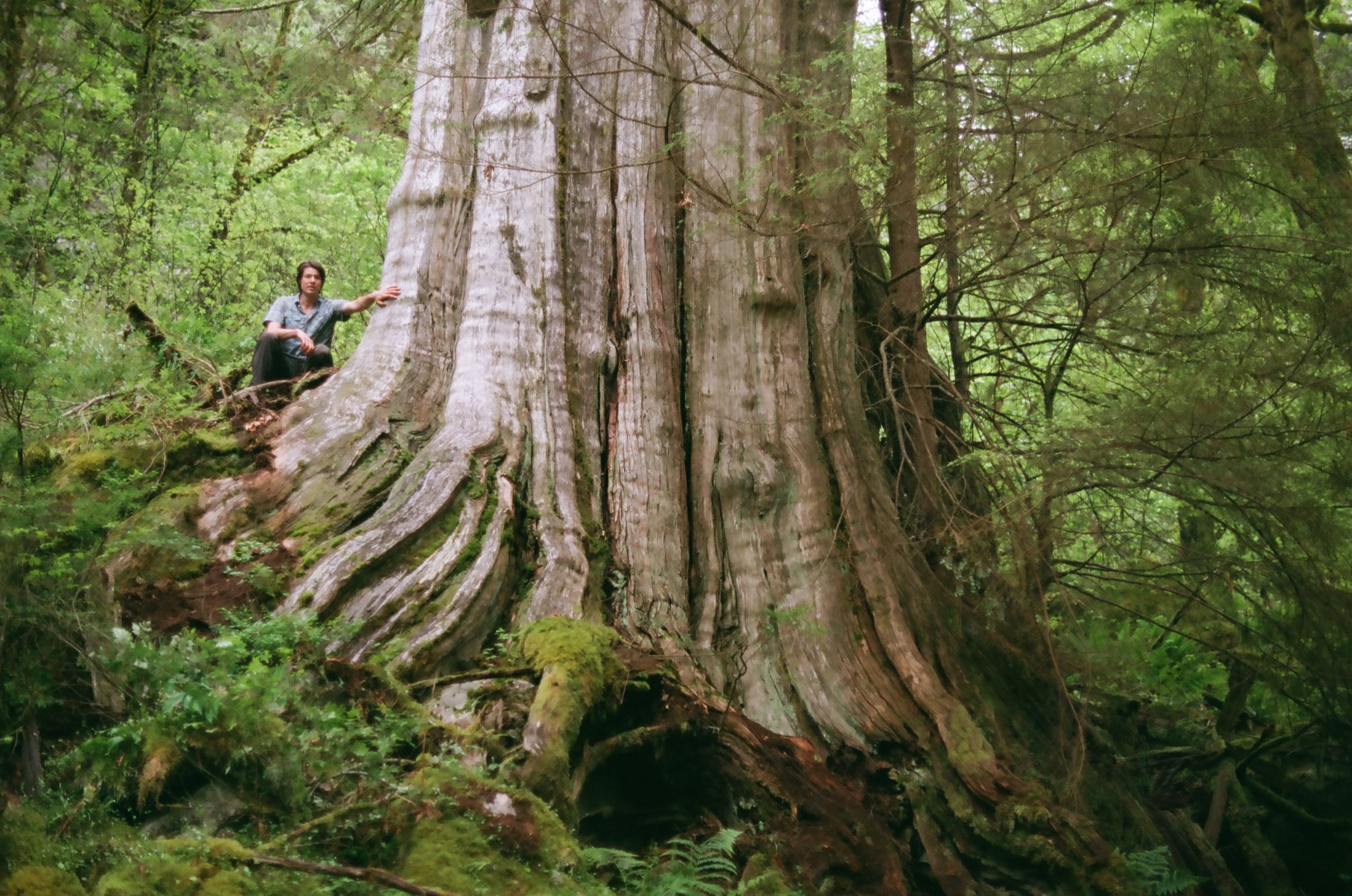 Colin Spratt and Ian Thomas set out to fully document and explore this incredible ancient forest. On their second expedition and after bushwacking for 10 hours, they finally arrived at the North Shore Giant and realized that this could be the widest tree that has been found in Canada in over 34 years. The current diameter measurement is a preliminary one, following the methodology of the American Forest Association’s Champion Trees Program, which has been the standard used by BC’s own official big-tree registry. Soon, members of the British Columbia Big Tree Committee will visit the tree to confirm the diameter and take official height and crown measurements for entry into BC’s Big Tree Registry.

“When I first saw the tree, I froze in my tracks and the blood drained from my face. I started getting dizzy as I realized it was one of the largest cedars ever found, and one of the most amazing life forms left on earth. Finding this tree is an incredible reminder of what is still out there in the less explored old-growth forests. It’s sobering to realize that in so many areas of BC, unprotected trees and groves just as rare and precious are still being cut down,” said big-tree hunter Colin Spratt. 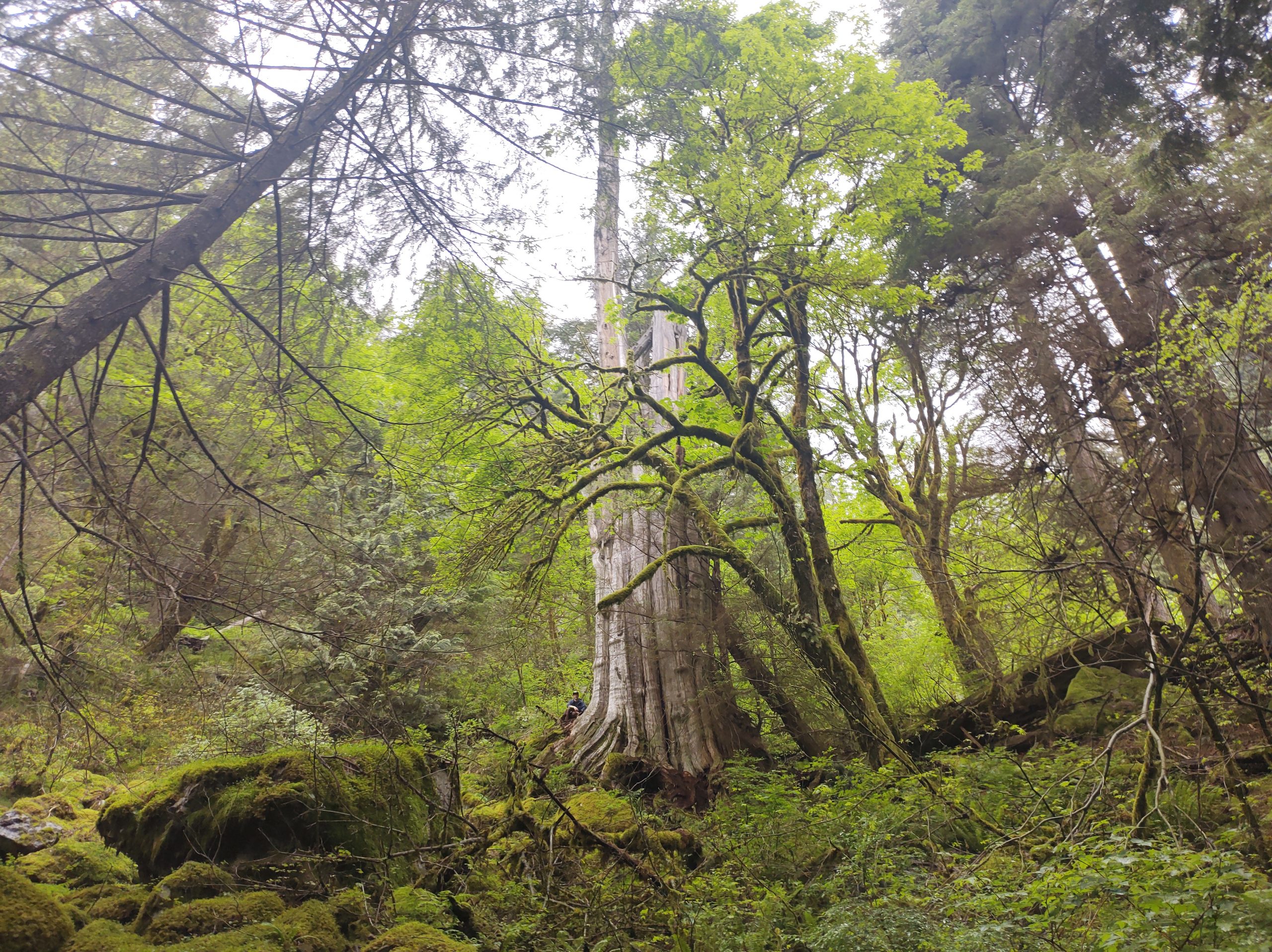 “This is one of the most remarkable big-tree finds of this century and it just shows how special the old-growth forests in BC are. Unfortunately, unless the BC government hurries up and provides the critical funding – several hundred million dollars more, which is peanuts if you look at their other massive spending projects – they will ensure that the status quo of industrial clearcutting of the last unprotected old-growth stands occurs. In particular, support for Indigenous old-growth protection initiatives and the associated sustainable economic development in the communities is needed, along with a major, dedicated land acquisition fund to purchase and protect old-growth forests on private lands. They can fix all of this if they wanted to in their upcoming budget,” said TJ Watt, Ancient Forest Alliance campaigner and photographer.

Background Info on Endangered Old-Growth Forests in BC

Old-growth forests have unique characteristics not found in the ensuing second-growth tree plantations that they are being replaced with and which are re-logged every 50 to 60 years on BC’s coast – never to become old-growth again.

In September of 2020 after the release of the report of their public input panel, the Old-Growth Strategic Review Panel, the BC government opened the door to a major policy overhaul in old-growth forest management for the first time in decades. In the summer of 2021, they commissioned a top science team that identified 2.6 million hectares of the most at-risk old-growth forests (the grandest, oldest and rarest stands) for deferrals on logging, pending First Nations consent.

About 1.05 million hectares or 40% of these priority stands, an area about the size of Jasper National Park, have now been placed under deferral from logging by First Nations and by BC Timber Sales (the BC government’s logging agency).

Permanent, legislated protection for most of these stands and others will take at least a couple of years while First Nations develop land use plans (a complex process) to determine which areas get protected via new Indigenous Protected Areas (via Provincial Conservancy legislation) and forest reserves.

Across BC, old-growth forests are on the unceded lands of diverse First Nations, whose support is legally necessary for the establishment of new legislated protected areas.

Successive BC governments have facilitated and fostered an economic dependency in First Nations communities on old-growth logging revenues and jobs, in the form of revenue-sharing, employment, joint venture, and tenure agreements.

Such an approach, called “conservation financing,” was implemented in the Great Bear Rainforest in 2006 (where $120 million from environmental groups, the BC government, and the federal government-funded old-growth protection and First Nations jobs and business development) and is now underway in Clayoquot Sound, resulting in the greatest old-growth protection levels in BC and significant economic development and jobs for First Nations.

Government funding is also needed to support forestry workers and communities in general affected by major land-use changes, along with compensation under the law for major timber licensees.

All told, well over a billion dollars in governmental funding will be needed to protect the remaining old-growth forests, which must be provided by the provincial government, which has the direct responsibility for provincial forest policy, and the federal government, which is already providing significant funding to expand protected areas in BC.

Under massive pressure, the province has put forward $185 million over the next 3 years, primarily for forestry workers as well as for communities and businesses, to help finance the transition from old-growth logging due to the deferrals. Perhaps half of these funds (maybe $90 million) will go to First Nations workers and communities – an insufficient sum. So far, the province is providing only about one-third of the $300 million that the province must provide to First Nations to match the roughly $300 million or more that the federal government is making available to expand protected areas in BC (including in old-growth forests).

In addition, the BC government has not yet embraced Canada’s national protected areas targets of 25% by 2025 and 30% by 2030 of the land and marine areas in the country, as the country heads towards hosting the UN Biodiversity Conference in December of this year.