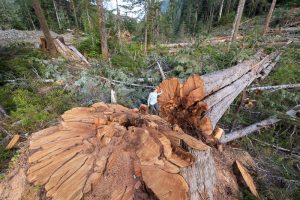 Times Colonist: An environmental group has filed a complaint over logging in the Nahmint Valley, alleging trees were cut, including one of Canada’s biggest, without regard to values such as conservation or recreation.

The Ancient Forest Alliance, an eight-year-old conservation group founded to highlight the need to protect forests as natural habitat, objects to the B.C. government decision to auction 300 hectares in various-sized cutblocks in the Nahmint Valley, southwest of Port Alberni.

Some of the resulting cutblocks logged last spring were 30 hectares. One contained a Douglas fir whose measurements, three metres in diameter, would have placed it ninth on the B.C. Big Tree Registry, a list maintained by the forest faculty at the University of British Columbia.

“Elsewhere in the valley, we found cedar stumps over 10 feet in diameter,” said TJ Watt, Ancient Forest Alliance campaigner in an interview. “There are a fair number of trees there that we feel should still be standing.”

Watt’s group filed a complaint in June with the B.C. government, contending the logging failed to take into account aspects such as the protection of sensitive or endangered plant communities. The big Douglas fir, about 800 years old, should have been left standing because it qualified as what is known as a legacy tree. The group has not heard any response to its complaint.

The Nahmint Valley is about 194 square kilometres, about 20 km southwest of Port Alberni. The area includes the Nahmint River, which widens into the 13-kilometre-long Nahmint Lake, both known for good fishing.

As far back as 1975, when the area was the responsibility MacMillan Bloedel, a B.C. forestry corporate giant at the time, the provincial government identified the Nahmint Valley as an area whose resources include more than just timber. They also include fishing, hiking, camping and wildlife habitat.

“The Nahmint is just a spectacular valley for anyone who visits the area,” said Watt.

The B.C. Ministry of Forests said in an emailed statement it reviews the timber blocks to be auctioned in the Nahmint Valley to ensure no legacy trees are at risk.

The ministry statement said B.C. Timber Sales, an agency responsible for about 20 per cent of annual tree harvest in the province by auctioning cutblocks, has conducted an inventory of old-growth cedar trees in Nahmint. It has identified more than 200 with a diameter greater than one metre and worthy of being considered for retention.

Also, an area of about 2,700 hectares, six times the size of Stanley Park, has been protected as wildlife habitat within the Nahmint Valley or identified as winter foraging range for deer and elk.

“We recognize the value of old-growth forests for their biodiversity and are currently working on an old-growth strategy,” said the statement.