We’re excited to share that AFA photographer TJ Watt was featured in CBC’s podcast, The Doc Project: Big Tree Hunt, which highlights his efforts to explore, document, and protect ancient forests in BC.

Read the article at the link or below: https://www.cbc.ca/radio/docproject/photographer-of-giant-old-growth-trees-has-best-and-worst-job-in-the-world-1.6251373

Tune in to hear more about TJ’s photography and conservation work and join a remote bushwhacking mission to Vernon Bay in Barkley Sound in the territory of the Uchucklesaht and Tseshaht First Nations, where they explore the area’s incredible-yet-unprotected ancient forests and find monumental redcedar trees up to 12 feet in diameter at risk of being logged. 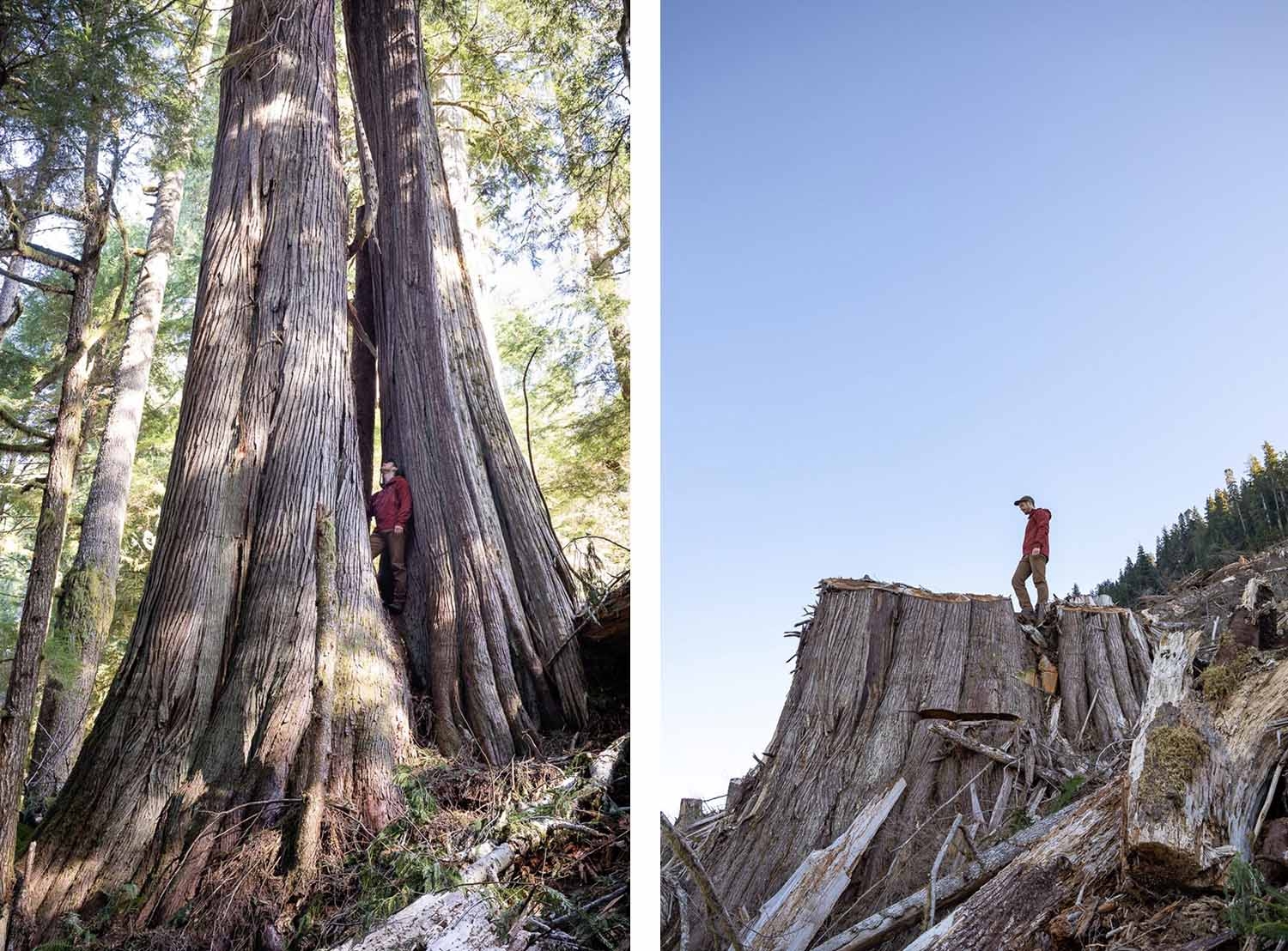 On an overcast day last August, TJ Watt made his way around the trunk of a giant western red cedar. In one hand, he clutched a yellow measuring tape. With his other, he pushed away a thick undergrowth of salal and ferns.

“It’s a small hike just to get around this thing,” Watt called out. A moment later, he read the measurement of the tree’s girth: a whopping 11.6 metres.

It was the biggest tree that Watt had found all day. To get here, he had hiked several hours off-trail, bushwhacking through dense, moss-laden rainforest, near Barkley Sound on Vancouver Island’s rugged west coast.

The Victoria-based photographer and activist has spent much of the past 15 years searching for and photographing some of Canada’s biggest, oldest trees. The trees he finds are often upwards of a thousand years old and wide enough to drive a car through.

His backcountry quests are more than just adventures though. Most of the trees that Watt finds are slated to be cut down. Watt’s photographs, which he posts on social media, have become a powerful tool for ramping up public support to protect B.C.’s old-growth forests.

“It can be hard to capture the complexity and the whole essence of this issue,” says Watt, who co-founded the non-profit advocacy group Ancient Forest Alliance 10 years ago. “You have to somehow find a single image that encapsulates all of that, and the feelings that go with it.” 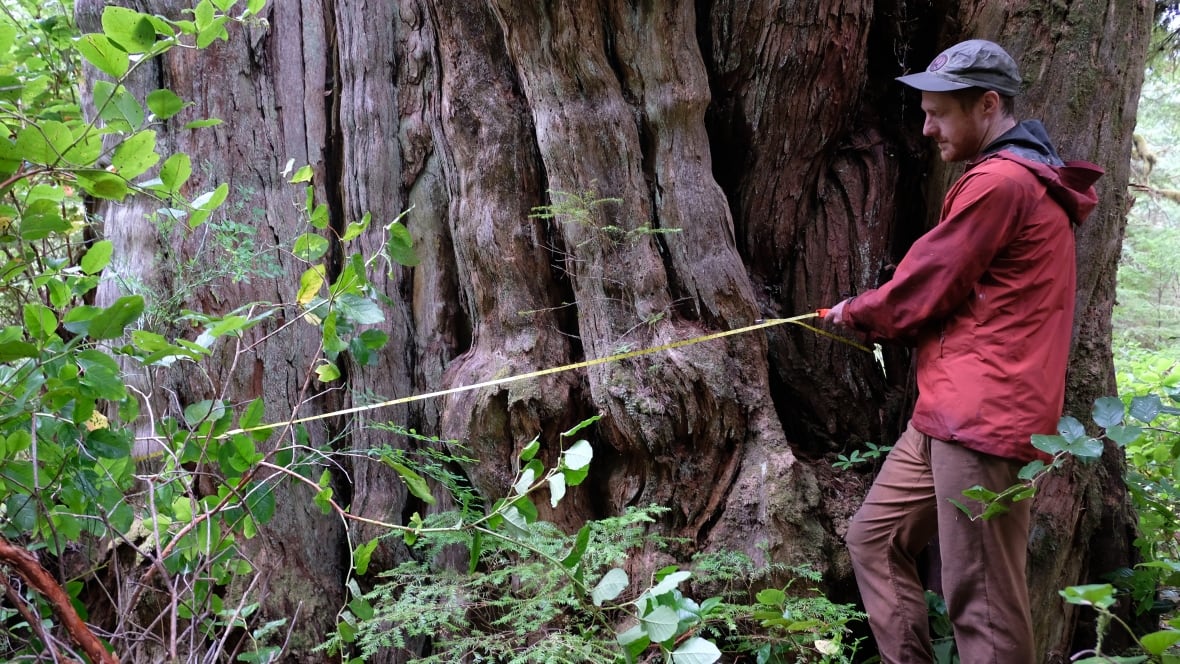 Old-growth logging has long been contentious in B.C. The debate first made headlines in the early 1990s, when hundreds of protesters gathered near Clayoquot Sound for the so-called “war in the woods.”

The protests garnered international media attention and shone a spotlight on logging practices in the province. Clayoquot Sound was ultimately protected and local First Nations have stewarded the area’s forests ever since. But elsewhere in B.C., old-growth logging continued.

In the last fiscal year, the province said $1.3 billion in revenue and more than 50,000 jobs were linked to the forestry sector. Logging is particularly important for some smaller, more remote communities, says Jim Girvan, a forestry economist and former director of the Truck Loggers Association. “If the forest industry wasn’t there operating, those small towns would eventually become ghost towns,” Girvan said.

An old-growth tree is defined in B.C. as one that is older than 250 years in coastal forests, or 140 years in interior forests. According to provincial data, roughly 50,000 hectares of old-growth forest are cut annually. The older, bigger trees tend to have the highest value, says Girvan, which is important for an industry that’s been struggling to keep afloat. “Old-growth logs, for example, are very good for making guitars, and that’s one of the products that a lot of people come to British Columbia for,” he explained.

For his part, Watt says he’s not opposed to logging but argues that it needs to be done differently — for example, in second-growth tree plantations, which replace old-growth forests lost to fire and logging, with trees re-logged every 50-60 years. Watt also feels “there should be a more value-added side to the industry.” Rather than exporting raw logs to other countries, Watt says, those logs should be processed in B.C. to make higher-end products.

Watt’s photographs have also led to a different economic opportunity: tourism. A stand of thousand-year old conifers near Port Renfrew, known as Avatar Grove, was protected after Watt’s photos caught the attention of hikers, ecologists and activists 10 years ago. Today, the area is a protected park and draws thousands of tourists every summer seeking big trees. Still, many of the trees that Watt has photographed have been cut down. Last year, he hiked into the Caycuse Valley, a few hours north of Victoria, just as logging was set to begin. He decided to try something different: photographing the forest before—and after—it was cleared. “I remember thinking that by tomorrow morning [these trees] won’t be here,” he said. “It’s a very odd experience to feel that you’re essentially taking a portrait of something in its final days.”

Watt returned after logging was complete and took photos from the same vantage points. Then he posted the before-and-after series on social media. The response was almost immediate, he says. “When you refresh the page just a few minutes later and it’s already got a hundred comments and a thousand shares, you can tell that it’s going to blow up in a big way.” 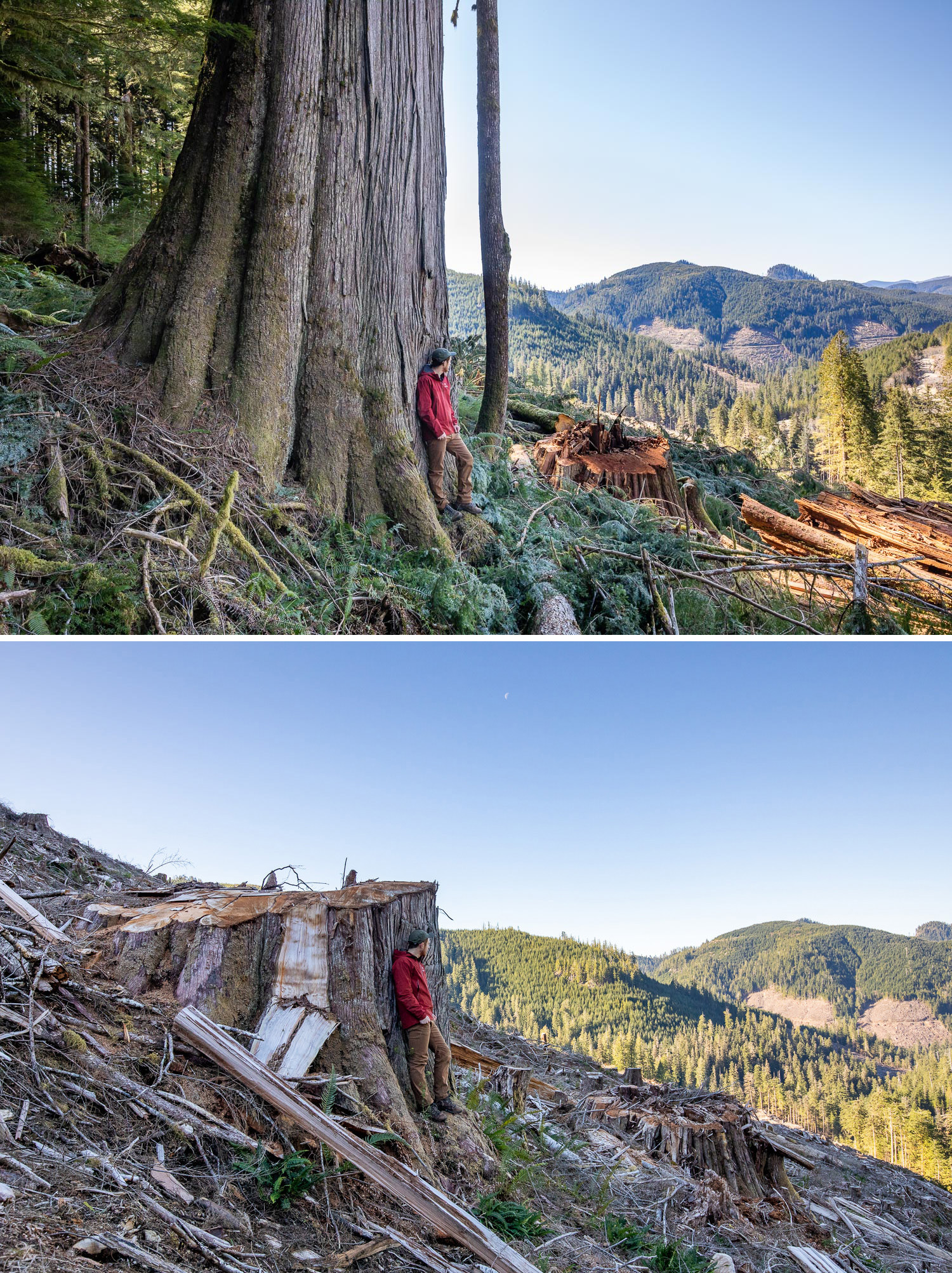 The photos generated some two million views on social media, along with international media coverage, and sparked public outcry. Since then, tensions over old-growth logging have reached a boiling point with more than 900 protesters arrested at anti-logging blockades in the Fairy Creek watershed—not far from the Caycuse Valley where Watt took the before-and-after photos.

In early November—facing increasing public pressure—the B.C. government announced, in principle, a temporary halt to logging in 2.6 million hectares of old-growth forests. The province stated its “intention to work in partnership with First Nations” to develop forest sustainability plans while logging of certain rare old-growth trees is deferred. If the deferrals become permanent, the province estimates that up to 4,500 jobs could be lost. Industry officials have suggested that number could be four times higher. The announcement came a year and a half after the provincially commissioned old-growth strategy review panel released its recommendations, calling for a “paradigm shift” in logging practices. The panel called for a more ecological approach to managing B.C.’s forests, and a stronger oversight role for First Nations.

“The small communities and logging contractors we spoke with were just as concerned about not losing biological diversity, not damaging our environment, as the people who are protesting out the windows,” said Al Gorley, co-chair of the old-growth review panel.

The provincial announcement came as welcome news for Watt. The giant western red cedar that he’d photographed near Barkley Sound this summer is located in one of the logging deferral areas, meaning it won’t be cut down any time soon.

After more than a decade of documenting trees before they’re cut down, Watt sounded cautiously optimistic. “At the end of the day, I need to know that I did everything I could to make a difference,” he said. “Hopefully our efforts pay off.”

“I think for someone who loves trees,” he added, “I have the best job and the worst job in the world.”